Man, it’s been a while since we’ve had a fresh Batch! Enjoy this particularly strong brew and feel free to leave us a comment!

Thoughts on Creature from the Black Lagoon at Sun-Ray Cinema

Saturday was a special night, since Sun-Ray Cinema screened Creature from the Black Lagoon in 3D. Star Julie Adams - accompanied by her son - introduced the film and stayed on to answer some questions and sign some autographs.

The film looked great. Compare it to a newer 3D film featuring a lot of underwater scenes like Piranha (which was post-converted to 3D) and it's like apples and oranges. Something like the latter looks dark and muted due to the post conversion process. Anyway, that sounds right.

The film has actually aged pretty well. Sure, effects and makeup have come a long way, but Gill-man still looks pretty good. There was a little too much laughing from the audience in certain scenes (as I recall, mostly when the fossilized Gill-man hand was being excavated and examined) but, all in all, the film held up.

Julie Adams is still awesome. She kicked the evening off with a playful “Welcome to the Black Lagoon.” If you’re unfamiliar with her (hell, Creature is the only thing I’ve seen her in, despite a very impressive filmography), picture the precursor to Jennifer Connelly and you’re on the right track.


Thanks to everyone that participated in our contest - a fella named Brian Andrews walked away with the Gill-man and the Sun-Ray gift card. Keep your eyes peeled for more contests here on the site - they’re going to become more of a regular thing.

Couple updates for you Pacific Rim fans. JoBlo.com posted this piece about a few new pictures that have been released. Even this is enough to excite me.

Also, not so much of an update as a weird observation. I recently re-watched all of Undeclared (Judd Apatow and company’s excellent one-season show about freshman Steven Karp (Jay Baruchel) and his pals as they navigate college - seriously, watch it) and realized that Steven’s British roommate on the show is none other than Pacific Rim star Charlie Hunnam! Holy crap! He looks completely different now!

So your friend and mine Tiff McEscapehatchenstein got me a sweet-ass “Film Map” for my birthday (this was back in December...I guess I’ve been busy).

Anyway, the map is basically a load of movie titles placed like landmarks on a map. You’ve got locations such as “Lake Placid”, “The Temple of Doom”, and “Phantom of the Opera”. “Shutter Island” is a brisk swim from “The Island of Dr. Moreau”. You can pay your respects at “Pet Sematary” and then catch a few winks at “Hostel”. Basically, it’s one of the coolest things ever made. Peep a few pics below. 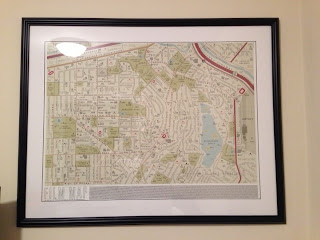 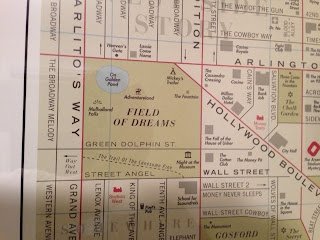 The World’s End Moved up to August - via Badass Digest

Awesome review of The Exorcist by Ruth from ...let’s be splendid about this...

Pat talkin’ ‘bout Bullet to the Head. Did anyone even see that?

When I watch the trailer, I wanna put a "Bullet to the Head".
— I'veJustGotToTellYou (@deltamonkeyfan) February 1, 2013

It's obviously not the LAST Exorcism if there's a sequel. #horror
— The Sexy Armpit (@sexyarmpit) February 7, 2013

George knows me. He gets me, you guys.

Chatting with Linds about InAPPropriate Comedy.

That’s all for now! Thanks for reading!