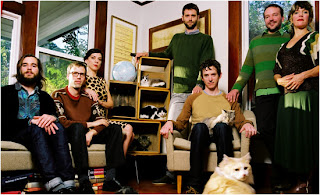 The Pacific Northwest is at it again. However, instead of flannel wearing rockers pissing and moaning about how hard life is, it’s an Arcade Fire size collection of flannel wearing hippies harmonizing about life and love. I don’t know what it is about the Pacific Northwest, but they produce some damn good music. For years, Death Cab for Cutie and The Decemberists have been representing with pride and now a new crop has emerged. With the likes of AgesandAges, Typhoon, Blind Pilot, Blitzen Trapper, Portugal. The Man and The Cave Singers, it looks like indie music will remain in good hands for years to come.

Today’s video for the song, “Souvenir” comes from, AgesandAges. They are a seven person band from Portland that recently grabbed some attention for showing up on President Obama’s Spotify list. Me doth protest, but not too much. As I was telling Tiff, I think some intern looking to score some brownie points threw “No Nostalgia” on the list to give the Commander in Chief some indie cred. I will admit that’s the pessimist inside me talking, but the optimist agrees, it’s a really good song. http://www.rollingstone.com/music/news/agesandages-the-presidents-new-favorite-band-20120210

If you like the sound of “Souvenir”, you should check out, the title track “Alright You Restless”, “Under A Cloud Shaped Like A Tomb” and the aforementioned “No Nostalgia”. Have a Great Monday and Happy Listening!