Obsessive Cinematic Disorder! A new feature where we dwell on films and obsess over the details. 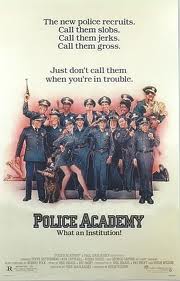 First up - the "podium" scene from Police Academy. I couldn't embed the video, so the link is below. Oh, and you'll probably need to sign in to watch it, due to the content. You don't shy away from a challenge, right? Watch the video then come back!

Okay, pretty self-explanatory here. If you're standing at a podium about to give a presentation, wouldn't you freak out the second you realized that your zipper was being pulled down? Wouldn't you at least burn the fraction of the percent of the calorie that it would take to lean back and look down at your crotch? How desperate was Commandant Lassard? I do love the awkwardness when The Gutt pokes his head out from under the podium at the end. Be careful around those podiums.