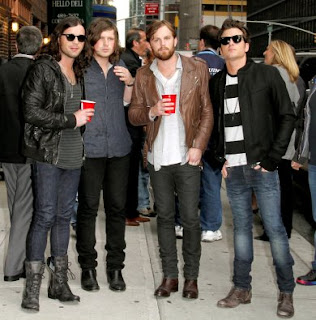 I was holding out hope that it wouldn’t, but it happened. Like a father that tells his child, “I’ll be there”, but doesn’t show. Like a first date who says, “I had a great time. I’ll call you.”, but never does. Like your favorite sports team making the championship game, but getting blown out. You get the point. I’m talking about disappointment.

If you’re a follower of this blog, then you know that we were supposed to be headed to Tampa today to watch Band of Horses and the headliner Kings of Leon. However that was all derailed yesterday around 3:45 pm, just after I dropped Robert's tickets off, with this breaking news story: Kings of Leon “We’re Canceling Our U.S. Tour.”

Then came the tweets, first by Jared.

“Utterly depressed. It’s completely out of my hands. Family has to come 1st. If bass solos & backing vocals were more popular, I’d be there.”

“Don’t jump to conclusions guys, We’re not breaking up.”

Followed by Nathan, “Bummed about the tour not happening. So sorry 4 all the fans. We just need some rest. Thanks 4 understanding. WE ARE NOT BREAKING UP!”

And then by Caleb, “Thanks to all our true fans for understanding and helping us through this hard time.”

Finally at 11:43 pm last night, I received this email as a final reminder that it was all too real:

Attention ticket holder!
We just learned that your upcoming event has been canceled:
Kings of Leon
1-800-ASK-GARY Amphitheatre
Tuesday, August 2nd at 7PM

Although I’m disappointed, I just hope Caleb deals with his issues. If he needs time to “rest his voice” and recover from “exhaustion”, then so be it because if he doesn’t get a handle on it, the results could be much worse than some canceled tour dates and thousands of pissed off fans. I think my fellow Hatcher, Tiffany, summed it up best when she said, “I’ve seen this before, it’s called Behind The Music.” Hopefully for Kings of Leon, this is the low point that every band featured on Behind The Music goes through, because I would hate to see it end with Caleb’s last words being, “I'm gonna go backstage for a second. I'm gonna vomit, I'm gonna drink a beer and I'm gonna come back out here and I'm gonna play three more songs."

Words of advice: You can write without drinking, just ask Ben Gibbard. Good Luck Boys!
Posted by Patrick at 5:00 PM