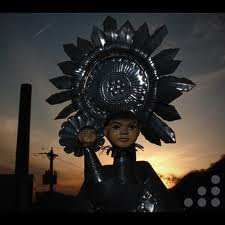 In a previous blog entry from June 3, http://totheescapehatch.blogspot.com/2011/06/watch-this-band-123.html , I mentioned a band out of Pittsburgh called 1,2,3. With their debut album called New Heaven, the duo, of Nic Snyder and Josh Sickels, is the latest band to jump into the musical pool I like to refer to as “falsetto rock” or “atmosphere rock”. For anyone who doesn’t know what that is, here is a simplified description: have a shitload of instruments; guitar, bass, drums, synthesizer, organ, tambourine, violin, sleigh bells, the kitchen sink (well you get the point) and one lead singer with a falsetto voice and accompanying harmony.

Don’t get me wrong my music catalog is filled with songs by Deerhunter, Grizzly Bear, Beach House, Panda Bear, The Antlers, Animal Collective, Atlas Sound, Broken Bells, MGMT and Dale Earnhardt Jr. Jr.. Unfortunately like most music genres (remember grunge), the industry or the artists tend to run them into the ground. Indie Folk bands you’re headed down that road, so take advantage while you can. Well anyways that’s an entirely different post for another time.

Although a bit skeptic by nature, two things got me very excited about this release. One, New Heaven was released on the same label, (Frenchkiss Records), as Freelance Whales, Local Natives and The Antlers. Two, the released singles: “Work”, “Riding Coach”, “Heat Lightnin’” and “Confetti” were quality and because of that quality, I’m going to cut right to the chase. New Heaven will be one of the top albums of the summer and possibly one of the top albums of the year. I know that’s a pretty bold statement, but this album has something for everyone: the indie/alternative music lovers, hipsters, casual indie fans and dare I say radio listeners - I think there are some of you still out there. Plus, the dance crowd will love it because DJs will probably remix the hell out of “Riding Coach”.

With so much diversity, 1,2,3 makes a strong effort not to be pigeonholed. They bounce all over the place; semi-industrial rock, indie folk, electronic, surf rock, lo-fi and even 50’s, 60’s & 70’s rock. There are tracks perfect for a drive with the top down, a chill house party or a night out at a sweaty nightclub. No two songs feel the same and it seems intentional. That’s my only complaint. It’s sometimes hard to get into a groove with this album, but don’t worry the wide arrangement of sounds and Snyder’s voice are enough to keep you entertained.

The lead track, “Work”, is a tambourine/violin laced jam (sound strange? trust me the drums make this song) that grabs hold of you and doesn’t let go. “Scared, But Not That Scared” continues the up-beat, chilled vibe. It’s followed by “Heat Lightnin’’, a track that sounds like it was recorded on the sandy dunes of the Atlantic with its lo-fi vibe, whispered vocals and crashing of waves.

“Lonesome Boring Summer” has a synthesized waterfall of violins and a very tribal beat. On “Confetti”, Snyder has a very purposeful mess up, let’s out an audible “fucker” directed at his guitar and then the band does a 180 with a thunder storm of cymbals, a grind of a guitar and Snyder’s forceful voice. “Confetti” is followed by, “Wave Pool”, the most eclectic song on the album. It starts out with a slight oriental vibe before transitioning into a 50’s/60’s surf rock groove and then finally turning into a 70’s psychedelic jam. I know it sounds like a lot of elements in one song, but as I said before, the assortment of musical styles is why it’s so difficult to pin these guys down.

“Riding Coach”, a super chill song (my favorite), takes you for one last windows down ride before “20,000 Blades” and the bonus track, “Mr. Officer”, close out the first swing by this dynamic duo.

In a nutshell, New Heaven is an expansive, flowing and almost impossible to categorize debut that should be given a chance by everyone. Again, my only gripe is that at times the songs feel like a gathering of different singles sewn together, but that’s not enough to turn this album away. I give it an "Open Hatch!" Sounds like: See artists above.

Email ThisBlogThis!Share to TwitterShare to FacebookShare to Pinterest
Labels: 1, 2, 3, by Pat