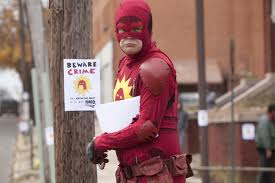 Super, writer/director James Gunn’s film about a slightly skewed everyman who squeezes into a home-made costume and fights crime, is sadistic. But it’s bizarre and funny and fun.

This is Gunn’s first film since 2006’s Slither, also an over-the-top gory spectacle. While both films are violent and bloody, (it’s clear that Gunn feels most at home when blowing folks’ brains out or letting the blood fly) Super feels like it’s trying to convey more of a message.

Characters in both Super and last year’s Kick-Ass both feature protagonists who choose to become superheroes. The difference with Super is that protagonist/mild-mannered diner cook Frank D’Arbo (played by The Office star Rainn Wilson) has a personal reason for doing so. You see, a baddie named Jacques – played by Kevin Bacon – has re-addicted Frank’s recovering drug-addict wife (Liv Tyler) and, as Frank puts it, “stolen” her.

Both Kick-Ass and Super ask why someone somewhere doesn’t stand up and become a superhero. In Super, Frank is that someone, and the choice he makes – the choice to fight evil, as the film puts it – has consequences. The answer to the question “How horrible would the consequences be?” is what Gunn seems to be exploring here.
Granted, Frank thinks he’s been chosen by God to fight crime as The Crimson Bolt. The film’s most interesting scene shows our hero being restrained by CGI tentacles while his skull is sliced open to allow God’s finger access to his brain – yeah, Super is that bizarre. The film makes it clear that this is in Frank’s head, so to speak. After all, the skull-slicing scene comes after Frank watches some other tentacles do some restraining (for a completely different purpose) on TV.

Religion is a big motif of the film. There are many scenes where Frank watches episodes of a TV show starring The Holy Avenger (played by Nathan Fillion, star of Slither and one of Super’s most enjoyable aspects). It’s this character that appears to Frank before and after the God/tentacle scene as well. Frank prays to God for guidance multiples times throughout the film. Et cetera.

The music in the film stuck out to me. I’m thinking of certain scenes accompanied by a specific, fun melody crafted by Tyler Bates (think of the “digging-the-costume-out-of-the-dumpster scene, people who’ve seen the film), and even the film’s opening credits are complemented by an animated, catchy dance number (again, Super is that bizarre). Details like the music are what make the film great.

The most important aspect of the film is the acting. For me, it’s not the supporting players (but actors like henchman-portraying Michael Rooker and cop-depicting Gregg Henry are great, though, the kind of actors that blend with the world of the film and the other actors and make you sort of forget you’re watching a movie). It’s not Kevin Bacon either, but his portrayal of the drug-dealing, cooking-complimenting bad guy (anyone think the brown eggs really do taste different than the white ones?) is fantastic and sleazy. And it’s not even Rainn Wilson, although he’s really believable as the pathetic Frank and demented Crimson Bolt. Again, like its predecessor Kick-Ass, Super’s high point in terms of acting and characters is the girl sidekick – Ellen Page’s Libby.

Foulmouthed and unhinged, comic shop employee Libby, as Boltie, is the Robin to Frank’s Batman. For me, the biggest shocks and laughs come whenever Page is onscreen. Her performance is pretty daring – I can’t really think of another Academy Award-nominated (or winning) actress that would do the things she does in the film.

The film isn’t perfect – thematically it’s a little muddy and the end of the second act drags a little – but whatever Super is, it’s nonstop and challenging. It might be the most realistic “what-if-someone-tried-to-be-a-superhero” film ever made (remember what I said about consequences) and that counts for something.
Posted by Robert at 3:22 PM

Email ThisBlogThis!Share to TwitterShare to FacebookShare to Pinterest
Labels: by Robert