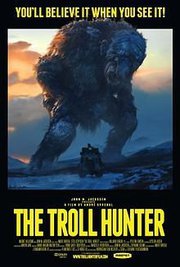 Three hopeful young filmmakers journey into the woods to investigate a local legend. The trio disappears but their equipment is found, including the shocking footage of what they discovered.

This might sound familiar but it’s actually a film from Norway called The Troll Hunter and, while it shares the plot of 1999’s The Blair Witch Project, it’s a completely different beast.

The plot is by and large the only aspect the two films have in common. While The Blair Witch Project was dark, depressing and spooky (if not terrifying, depending on how old you were when you watched it) The Troll Hunter is visually rich, a little goofy, and often times awe-inspiring. Shot in Western Norway, the film is full of beautiful landscapes and even the forbidding woods are a treat to look at.

To be fair, Troll Hunter isn’t just another film about people getting lost in the woods. As the title implies, it’s all about professional troll hunter Hans and his efforts to hunt and destroy escaped trolls wrecking the Norwegian countryside. Trolls aren’t something we’re asked to suspend our disbelief in very often, and it’s refreshing to see a horror movie that isn’t about vampires or another overused creature.

Speaking of not seeing trolls very often, another film Troll Hunter might inevitably be compared to (or contrasted to) is director Claudio Fragrasso’s disasterpiece, Troll 2. There’s no pissing on hospitality within this newer film, however – someone call Fragasso and tell him that this is how you make a movie about trolls.

In terms of horror, it seems as if writer/director André Øvredal was going for tension more than terror. While Blair Witch petrified audiences with what we couldn’t see, Troll Hunter shows us the Boogeyman up close and personal.

The difference might be due to the taste of the two films’ directors, but it has to have something to do with the evolution of special effects as well. And the topics of the two films undoubtedly made a difference in regards to how much was shown. Even if the witch was glimpsed in Blair Witch Project, it could have just been a woman in a costume. The crew behind Troll Hunter had a much bigger task, and they aced it.

Øvredal is able to show us genuinely realistic-looking creatures thanks to the abilities of modern special effects. If Troll Hunter was made 12 years ago, we might have seen a lot less of the trolls – or they would have looked a lot worse. With today’s special effects, we see trolls as real as they get.

Low budget films with high-quality special effects are being made more and more. 2009’s District 9 comes to mind (another foreign film). It’s amazing what filmmakers can show us these days, and not just the ones whose film’s effects budgets are in the millions of dollars.

The film is also another entry in the increasingly popular genre of found footage. It shares the genre with films such as Blair Witch, more recent films like Paranormal Activity, and the upcoming Apollo 18. I think The Troll Hunter might actually be billed as a “mockumentary” but when I think of that term my mind goes to something like Best in Show. Troll Hunter isn’t supposed to be something that its fictional filmmakers actually made – it’s chilling footage that was found and then assembled into a movie by whomever discovered it.

The cast assembled did a fine job – I especially liked Otto Jespersen, the actor portraying Hans. The man hates his job hunting for trolls and Jespersen injects sadness, fatigue and a little humor into the role. Through Jespersen’s character we learn that the film crew is allowed to document his job because he wants to expose himself and the secret organization that he works for, known as the TSS (Troll Security Service, of course). I think Jespersen underplayed the role. Anything else might not have worked considering the slightly tongue-in-cheek tone of the film.

Øvredal clearly spent a lot of time coming up with the world within this film. The film’s trolls turn to stone or explode when exposed to sunlight (which is apparently in keeping with troll lore). It’s mentioned that trolls are mammals. Different aspects of troll biology are discussed, and Hans lists the different breeds of trolls, ranging from the Ringlefinch to Mountain Kings.

It figures that belief is a major theme of The Troll Hunter. The filmmakers were actually initially following Hans because they thought he was a poacher (the TSS leaves bear carcasses behind to explain the trolls’ destruction to the unsuspecting public), but when he reveals to them that he’s supposedly a troll hunter, they don’t believe him. Shortly after they team up, Hans informs them that if they believe in God or Jesus, they can’t tag along as, trolls can smell the blood of Christians. So we’ve got characters swearing that they’re non believers so they can follow a man who hunts creatures that they also don’t believe in.

In short, being religious is a major job hazard if you’re a troll hunter. You can’t believe in God if you want to believe in trolls. I’m not exactly sure what Øvredal is saying about faith, but the film crew’s cameraman turns out to be religious and things don’t end that well for him. As a side note, I read on Wikipedia that Jespersen, a controversial comedian in Norway, once burned a copy of The Old Testament on his comedy show.

The theme of heroism comes into play during the film as well. The leader of the filmmakers, Thomas, played by Glenn Erland Tosterud, tells Hans he’s a national hero a few times throughout the movie. Hans always denies this. We find out why late in the film, and I’m wondering if his explanation is a metaphor for another big issue.

I have a little problem with some unanswered questions about the ending, which I can’t discuss without spoiling the film. Also, the topic of the environment is briefly mentioned but never really explored (how are trolls affected by global warming anyway?) which maybe seems to tell me that Øvredal wanted to tackle this issue but never really committed to it. Overall, however, the film’s visuals, its quirkiness, and the detail that went into it make it a winner.
Posted by Robert at 2:39 PM