Sometimes the hardest part of these Favorite Scene Friday posts is actually tracking down a clip of the scene you want to discuss. When Robert suggested writing about a festive-themed film for the month of December, my mind initially went in a few directions, but eventually settled on a childhood fave of mine, Home Alone, and more specifically the scene which features my top quote from the franchise, Daniel Stern's Marv yelling "Suck brick, kid!" as he throws a brick at Macauley Culkin's Kevin after an evening's torture and humiliation, which included a fair few bricks thrown in Marv's direction. Alas other than that one sound-bite I couldn't find a video of the scene, and what began as a quest through YouTube evolved into me essentially falling into a pit of Home Alone 2: Lost in New York clips, which was a mighty enjoyable way to spend some time, I can tell you. As such I've not picked one scene to discuss today, instead I've gathered a bunch for your viewing pleasure. These all take place in the second half of the film, otherwise known as "the part you're looking forward to". 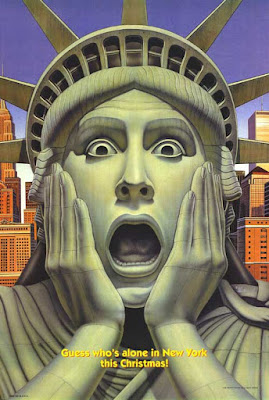 If you're unfamiliar, Home Alone 2: Lost in New York sees Kevin McAllister alone in the Big Apple after an airport mix-up when he gets on the wrong plane as the rest of his family head to Florida. There he encounters his former foes Harry (Joe Pesci) and the aforementioned Marv, who attempt to burgle a toy store. Kevin bungles their plan and leads them to his aunt and uncle's house, which they have left for renovations, and Kevin has rigged with a heap of traps. Whilst I love the first film, I prefer this sequel as it raises the game in terms of the traps Kevin sets, and has a little more fun in the build-up half as well. Plus. in this film Kevin becomes even more pragmatic, going out of his way to catch the thieves instead of just defending his home from them. Anyway, just like the film you don't want to read my rambling much more, you'd rather see the carnage:

This first scene is the precursor to the later brick-based moment, and it seems stone projectiles are just something I enjoy seeing being thrown in peoples' faces. Kevin is on the roof, and he wants to anger Harry and Marv enough so they'll break into the house and try to catch him. He has evidence of them committing a robbery, and is trying to keep them occupied for long enough for the police to catch them. This is how he riles them up:


It's unknown how many times I can watch Daniel Stern get hit in the face with a brick before it stops being hilarious, but that number is at least four. He has such an expressive face, and plays the increasingly dazed pain so well. Pesci's goading is great too, but this moment is all about Stern's unintelligible blubbering. After this encounter, the pair take their usual tactic of splitting up and trying to work their way into the building via separate routes:


Marv versus the staplegun. By this point you have to understand that what you're watching is a live-action cartoon. Of course most of this wouldn't work for various reasons, mostly involving physics and biology (namely how many times the antagonists would be killed), but Marv getting stapled in the arse is just utter nonsense, but it's a lot of fun. I love the bluff that you think it'll staple his foot when he braces it against the door, only for him to exacerbate the situation with his backside, then his groin, and finally his nose. If anything Pesci gets off comparatively lightly, especially given he's been spared the multiple bricks to the face, here suffering only a short fall from a greased up ladder. It's OK those, because things will soon be getting worse for him. Also, this is the point where Pesci solidifies the cartoon nature of the film by becoming the human embodiment of Muttley. Once they finally get inside the house, they soon wish they hadn't:


Easily two of the most hilarious and ridiculous traps occur adjacent to one another, and really show off Kevin's ability to predict human nature. After Marv enters and gets covered in paint and a bookcase, it's understandable that he'll want to clean himself off at the nearby sink. Alas, the taps don't dispense cool, cleansing water, but a skeleton-inducing amount of power, causing Marv's hair to frizz out and his flesh to literally disappear from his entire body, if only momentarily. Meanwhile, upstairs, Harry gingerly tests the light pulls, all too aware of the iron-to-the-face Marv received last time they encountered Kevin. Here his fate is ultimately worse, as a pull causes a blowtorch to set his hat alight (again! It seems in these films, where Marv has a tendency to get hit in the face, Harry is more likely to fall over and get burned). Once again Kevin predicts the sink will be the first destination, but that's not working either, and the bowl of what appears to be water in the toilet looks very tempting to the aflame Harry, who executes a perfect handstand on the bowl, and realises perhaps a little too late that it's actually full of kerosene. Obviously he'd be several kinds of dead in real life, but here he just receives the classic soot-caked face and teeth.


The final clip is a classic, and the most call-back-heavy of these, as it directly references the paint can swings from the first film, but plays with it by making our villains feint being hit, only to be taken out by a giant, heavy bollard-type object, twice. It's not as entertaining as the others, sure, but damn it's gotta hurt. The scene I'd been really looking forward to though was when the crooks finally make it to the roof (after being apprehended by, amongst other things, a tool chest rolling down the stairs) and see Kevin down below. Marv, hungry for vengeance, makes the obvious move to pick up a brick and throw it at his foe, yelling the immortal line:


I love it. And when the two start to climb down the rope and get about halfway, Kevin sets it on fire so they climb back up, but not quick enough, so they fall back down, land on a big seesaw catapult that fires a load of paint cans into the air, which fall upon them once again. It's like The Bricklayer's Lament, but far, far sillier. It's a very silly film, that also at other times is very touching, but I watch it for the ridiculous cartoon violence, the ingenuity of Kevin, and mainly for the reaction shots of Joe Pesci and Daniel Stern.

What's your favorite scene from a Christmas movie? Does it involve grown men throwing bricks at children? Why not?