The Purge takes place in a world where, one night a year, all crime is legal. The film focuses on the Sandin family. Father James (Ethan Hawke) - who works for a security company and has sold everyone in their posh neighborhood their security systems - mother Mary (Lena Headey) and two kids, Charlie and Zoey.

On the night of the purge, Charlie lets in a man who's been targeted for murder by a group of purgers. Zoey's older boyfriend also sneaks into the house before lockdown. He claims he's there to simply talk to James (the father has an issue with the age difference in the relationship) but we find out his intentions aren't really what they seem. All this leads to the Sandin family fighting to stay alive on purge night.

The biggest problem with this movie for me is that every character is near insufferable. Ethan's James is kind of smug. Lena Headey is kind of bland. The kids are super annoying. But I guess maybe this was intentional.

Something that also annoyed me is that, sure, everything is legal on Purge Night. But it seems like most people who purge put a lot of thought and planning into their activities. Couldn't these people be held accountable for conspiracy to commit...whatever? I don't remember hearing or reading anything that would explain this away. There was some type of announcement that (certain? all?) politicians are immune but that's all I really remember.

The bad guys also get really bent out of shape about people infringing on their right to purge or something like that. But...everything is legal and nothing is illegal, so the "right to purge" kind of goes out the window?

All in all, this was a decent horror/thriller, but nothing to get too worked up over. 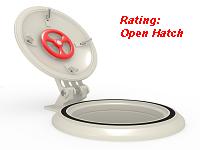