Tomorrow's the first day of summer! Let's celebrate by watching one of my favorite clips from David Wain's Wet Hot American Summer.


Wet Hot American Summer is a movie about what happens on the last (very long) day at Camp Firewood in the summer of 1981. The film is situated very firmly on the zany end of Wain's filmography, more like The Ten (and, I suspect, the upcoming They Came Together) than the more accessible and narrative-driven Role Models. For example, there's an awesome extended scene in WHAS where most of the camp counselors make a run into town and their fun little getaway gets progressively darker until they're all doing drugs in a dark room (remember, this whole movie is supposed to take place in just one day). There's also a long, ridiculous sex scene between Michael Ian Black and a before-he-made-it-big Bradley Cooper. Yeah. Also, today's scene.

Neil (Joe Lo Truglio) and Victor (Ken Marino) are counselors at Camp Firewood and they've been tasked with taking some campers on an overnight canoe expedition. The only problem is Victor wants to get laid back at camp. So he takes the group's van and leaves. But the kids need him and the map so Neil goes off to find him. The only problem is, he leaves them while they're in the middle of canoeing down the river!

Neil's able to track Victor down by quickly stealing a motorcycle (did they shorten that part of the scene? You can see the bike owner in the tent in the background). It helps that Victor crashed (OHFUCK!!!) the van and set out on foot. Watch the whole thing below.

I love how Joe Lo Truglio gets out of that canoe. I used to really dislike him, but my feelings were based entirely off of his performance in Superbad as the slimy guy who takes Jonah Hill and Michael Cera to a party to get booze. He's hilarious here, and his hijinks on the motorcycle are another high point. My favorite part of this scene has to be the hay jump. It's ridiculous and silly but probably something that a lot of actual '80s films would have tried to get away with back in the day (the same can be said for this scene as a whole). Enjoy your summer, everyone! 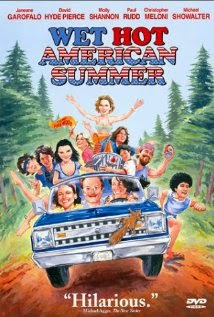