Over the weekend some folks here in Jacksonville got the chance to catch Cheap Thrills at Sun-Ray Cinema. The movie follows two old friends, Craig (Pat Healy) and Vince (Ethan Embry), who end up committing progressively crazier tasks in order to win cash from mysterious couple Colin and Violet (played by David Koechner and Sara Paxton). Thrills is a dark comedy but, as the name implies, it's just as easily a thriller and it's not for the faint of heart - I literally gasped in shock towards the end. I had the chance to ask director E.L. Katz a few questions about the movie. 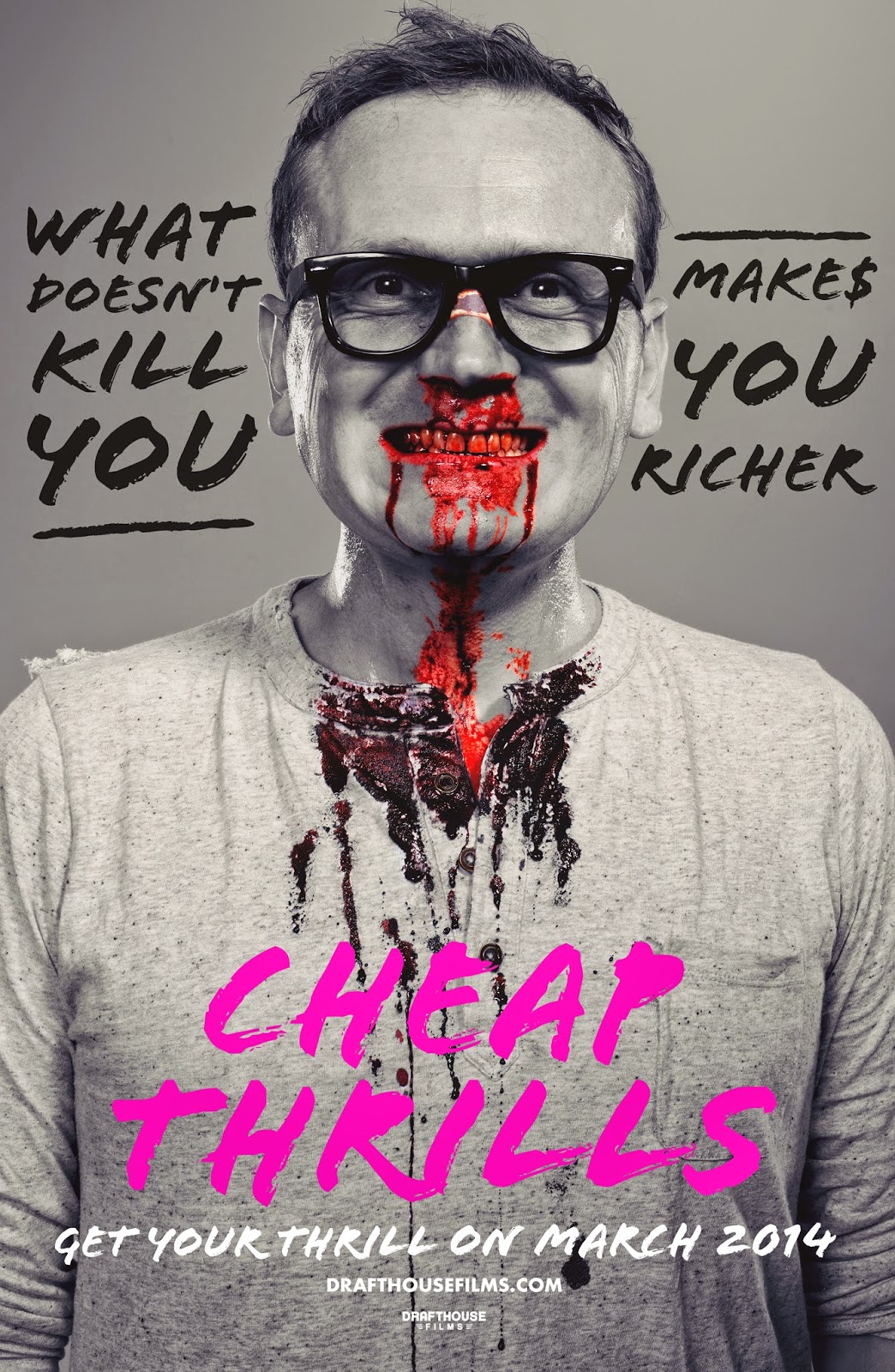 Q: The film explores what main characters Craig and Vince are willing to do for money, and the character Violet obviously enjoys documenting the events of the film with her phone. Is it safe to say that Cheap Thrills is a commentary on our reality show obsessed culture?

Katz: I think that’s one element of it for sure. I think that reality shows can sometimes be so much more screwed up than any sort of horror film or dark comedy, because they have such a twisted world view, and yet it’s presented as just sort of normal mainstream viewing. We get used to watching real people suffer, and be humiliated for the purposes of a shitty show, and we’re not supposed to care.


Q: Did you find yourself having to reign in either the comedy or thriller aspects while you were shooting or did they balance and blend well?

Katz: I really tried to focus on just making everything feel “real” and just trusted that the humor would come through naturally if something was funny… and if it wasn’t, then that was okay too. I never wanted to try to film it as a comedy or anything like that. When it came to the thriller elements, I tried to push things visually a little bit more towards the end of the film… made the lighting slightly darker, would film around corners a little, just tried to make things a little more off-kilter.

Q: Was it more daunting or liberating bringing these different genres together?

Katz: I’ve always wanted to blend these kinds of tones and genres, so if anything it was really freeing. I’d spent so much of my career working on more straight-forward horror, that it was very liberating to throw out the playbook so to speak, and just go a little crazy with it. 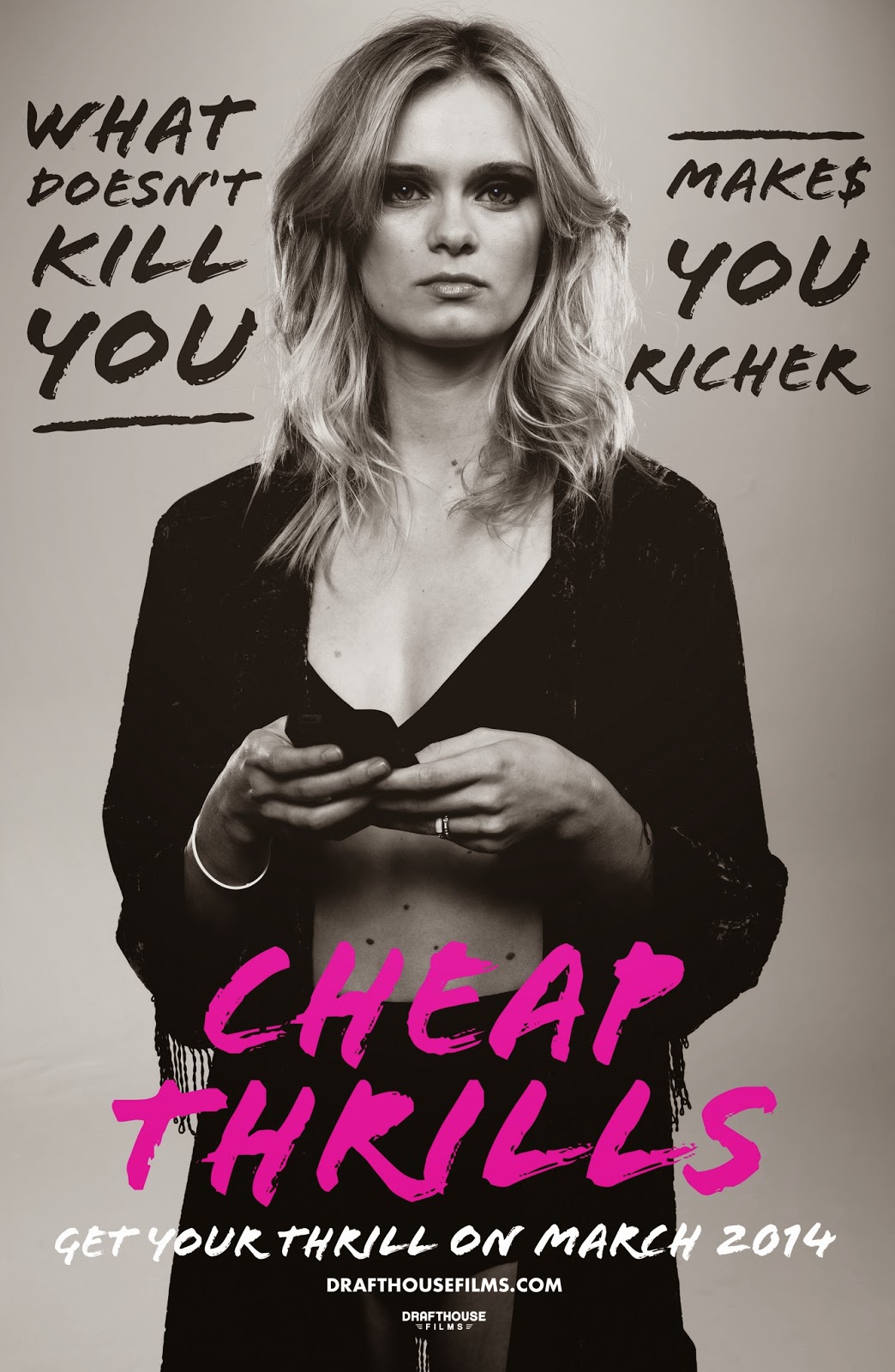 Q: How important was it for the two “contestants” to be old friends who hadn’t seen each other in years as opposed to strangers? There seemed to be a conscious theme of facing your past.

Katz: I think the film does have themes about facing who you are, against the expectations of who you might have wanted to be… and being faced with your best friend from a time where everything seemed possible felt like it would service that. Also, it seemed like, Colin and Violet would prefer to find a duo that could perhaps have some baggage that [they] could use to turn the contestants against each-other. It might have been less charged if they were just two strangers off the street.

Q: Is there a particular bit of trivia from the film that you like sharing?

Katz: We shot the film in 14 days during one of the hottest LA summers in recorded history.

Cheap Thrills is now in theaters and on demand.
Posted by Robert at 2:35 PM