The Talkies with Richard Kelly at Sun-Ray Cinema

Not too long ago at all (okay, it was October 11th, just over a month ago), director Richard Kelly stopped by Sun-Ray Cinema here in Jacksonville to provide live commentary on his modern classic, Donnie Darko.

I've always been a fan of the film so I couldn't pass up the opportunity to watch it with the director. And Kelly wasn't alone - Frank was on hand to make sure everyone got into the theater okay.


Sun-Ray owners Tim and Shana play interesting clips preceding their screenings and, since Donnie Darko has such an awesome soundtrack, they played several music videos, including Tears for Fears' "Head Over Heels". That song plays over a sequence in the film where Donnie is walking through his high school.


Tim and Shana then introduced Richard Kelly and the screening began. In all honesty Kelly was a little soft-spoken at first but after some sound adjusting and time to get accustomed to his audience the screening went great. It was awesome to see the film on the big screen and Kelly was full of interesting facts and anecdotes about the movie. A few highlights of the evening:


Kelly stayed after the screening to meet fans and I was able to get a picture with him. I also got him to sign the Sun-Ray ticket below. 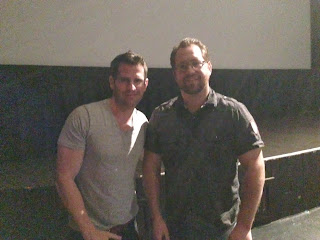 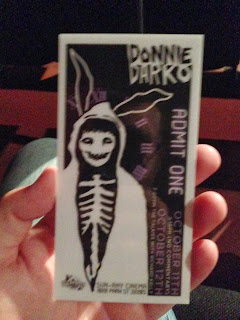 All in all I had a good time! Donnie Darko is an interesting, classic film and Richard Kelly was a great host. And Frank didn't mind taking a selfie with me. 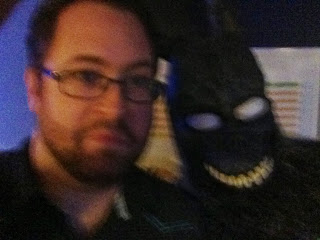