Music Video Monday!: The Best 2:14 of Your Life 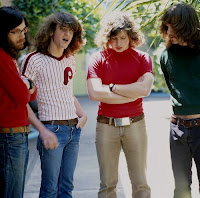 They were young, wild, skinny and a threat to take over the alternative/indie music scene and possibly the world. Kings of Leon did not hold back. They played fast, loud and out of control. Today's MVM reminds us of just how raw their early sound was. Over eight years later, I still haven't grown tired of an almost inaudible Caleb. "Huffman don't take no nonsense."

I wish I could've seen them live before Only by the Night. In my opinion, music from their first three albums is some of the best in the past 10 years. Although they made my shit list on Tuesday, August 2nd, 2011 when they canceled their tour, I've gotten over my anger and this morning I'm gonna share one of my favorites with you. From their 2005 album, Aha Shake Heartbreak I give you, "Four Kicks". If you know the band, then you'll notice the relative who makes a cameo at the beginning of the video. If you are looking forward to the new album, Mechanical Bull or if you wanna tell us your favorite KoL song, let us know. Hope you enjoy your Monday and remember to live your soundtrack out loud.