I’ve barely had time for posts like these lately, which is unfortunate. On the bright side, the reason I don’t have a lot of time is because The EH Team has been busy. Like, fun-filled weekends kind of busy. That being said, I’d like to rant a little about our recent Friday. Let me explain...

We had gone out to Jacksonville Beach to watch the original Iron Man as part of the Moonlight Movies series. The concept was fun but the entire experience was pretty much ruined by a group of insanely drunk douchebags. This group of people - who were seated in a circle (yes, some of them weren’t even watching the movie) right in front of us - talked - nay - yelled, throughout the entire film. And whenever we or anyone else tried to shush them, they responded like we were the assholes. They even called us townies! I didn't think anyone actually used that phrase. Their main argument seemed to be that we could watch Iron Man on TV, since it supposedly comes on TBS all the time. They couldn’t seem to grasp the concept that, hey, we don’t want to watch it on TV, we came here to watch it on an enormous screen. I know we weren’t in a movie theater, but that doesn’t matter. You should still be somewhat respectful when the activity you’re engaging in requires silence. Talk about your DUI (Seriously, a girl talked about this. Loudly. The same girl complained about how she had been shushed at a screening of Men in Black.) on your own time. So go fuck a cactus, you guys. 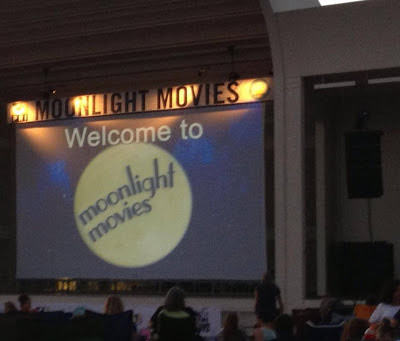 Moving on, on Sunday Nick and Mrs. Nick accompanied me to a screening of the 4th Season of Arrested Development at Sun-Ray Cinema. I wore my Bluth’s Frozen Banana shirt, as did probably half a dozen others. A few other folks wore Arrested Development themed T-Shirts, everyone snacked on actual frozen bananas courtesy of Sweet Pete’s, and a general good time was had by all. I’m not sure if there’s always blue lighting in Sun-Ray or if they switched out the lights just for AD but, either way, it was a nice touch. 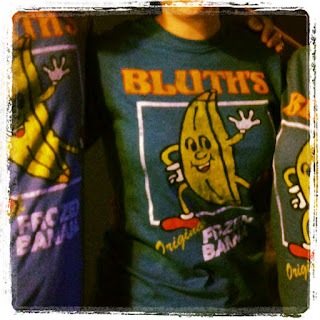 I didn’t watch the entire 4th season at Sun-Ray, but I did finish it later that night (I stayed up until 3:00). I thought that the season, while good, focused a little too much on the plot and not enough on the characters. I’ll probably never re-watch it the way I can re-watch seasons 1-3.

On Memorial Day we went to a free concert at the Landing to watch The Features perform. I wasn’t familiar with the group but I liked what I heard. After the concert we grabbed some drinks and I played around with the Vine app. Here’s Nick trying to find the perfect pair of glasses.


Enough about us, let’s move on to some new trailers and movie news!

I was planning on writing this Batch last week, that’s why all of these trailers are a little old. First up, The Wolverine. This is a much better trailer, as the first few were a little silly. I’m really hoping this new movie tickles my fancy, especially since Wolverine will be popping up in the new X-Men First Class flick. I don’t want to be sick of him by then.

The fourth Man of Steel trailer is quite amazing and action filled. I’m really looking forward to Kal-El beating the crap out of something (anything!).

The new The World’s End trailer is a little slice of fried gold. It really gives you a good feel for how the actors will play off one another and it looks hilarious. Plus, it reveals that the antagonists are (spoiler alert!) robots! I thought they were aliens until I watched this trailer (maybe they’re alien robots?)

Don Jon, Joseph Gordon Levitt's directorial debut, made the Honorable Mention section of my 2013 Anticipated Films list. I hadn’t seen a trailer when I wrote that list and I was just going off the way the movie sounded on paper. So I’m happy that the trailer makes the movie look really solid. ScarJo plays a New Jersey girl really well. A little too well.

Which of these trailers is your favorite?

JoBlo reported last week that the new Poltergeist film might end up being a sequel and a reboot, similar to producer Sam Raimi’s recent Evil Dead sequel/reboot combo. My motto with reboots is “It’s bound to happen sooner or later,” so this news doesn’t really bother me. Poltergeist is one of my favorite films of all time and a reboot could royally suck, but I have faith in Raimi.

Are you looking forward to this film? Would you rather a straight reboot or a straight sequel?

Capping off the news section of Batch o’ Hatch with a bang, there is now an updated version of the Journey to the Center of Hawthorne game from Community. Plus, there’s rumblings that Dan Harmon could come back to the show??? As the A.V. Club points out, there’s no precedent for this, so it’s exciting. I don’t see why Harmon wouldn’t come back, especially now that Chevy’s gone. I mean, NBC really dicked him over, but it's his baby and I could see him burying the hatchet in order to come back. Fingers crossed that Harmon will return for the final two seasons and the movie as well.

What do you think? Will Harmon come back?


CT from Nerd Lunch spreading the news that the IT Crowd is returning to TV!


Ruth from "...let's be splendid about this..." sharing a Simon Pegg Tweet about a possible new Trek film. I'm not sure if he's joking or not, but this would be awesome. By the way, read Ruth's review of Star Trek Into Darkness right here.

@zerbert !!!! Speaking of possible sequels!!!! This would be so cool if it happened. twitter.com/RuthElizabeth_…
— Ruth(@RuthElizabeth_R) May 21, 2013


That's all for now! See ya next time.