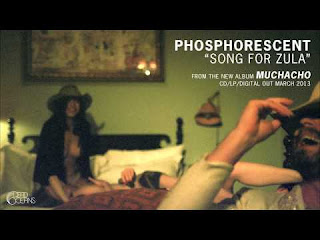 I decided to just dive right in this week and update you on an album I mentioned last month, Phosphorescent’s Muchacho.  It’s incredible, people.  Simply incredible.  Contained within his sixth studio album are 10 of the best songs I’ve heard to date in this savage year of our lord, 2013.  If you happen to come across one of his albums, really any of them, I fully encourage you to pick them up.  His songwriting is delicate, thirsty, horrific, and splendid, all at the same time.  Backed by layers of instruments and sounds, his voice is like that of a well respected professor teaching an aspiring young group of collegiate learners.  Even as I re-listen for approximately the 10th time since Friday, I’m finding it difficult to not just stand up and sing; to shake my hips like a fleshing virgin at a first time concert.  This guy, Matthew Houck is his given handle, has tapped into something within me that’s been untouched since I was in college, partying to till near death, writing blindly among the middle of the humid nights, and living out loud for the first time.  Phosphorescent is my new favorite artist, hands down.
The album begins and ends with a couple of three-minute meditational hymns about taking it easy.  Both respectively sound like an opening and a closing of a novelistic musical album.  I’ve always liked that idea; when bands have a standout opening track and end their album with a reprise or a similar take on essentially the same song.  I prefer my albums to begin and end with a meaning, all circular, much like most things in life.  After the enchanting opener, Song for Zula takes us on a lyrical whirlwind of what love really is and how it can not only encourage, but also kill.  It’s an amazing tune and at six-minutes, it’s an eye-opener to the type of artist you’re listening to – a latter day Blood On The Tracks Dylan, lyrically speaking – it’s a song that desires to have a drink accompanied with it, an uplifting yet depressing take on the power that love wields.  “Oh but I know love as a fading thing / Just as fickle as a feather in a stream / See, honey, I saw love.  You see, it came to me / It put its face up to my face so I could see / Yeah then I saw love disfigure me / Into something I am not recognizing.”  Beautiful.  Absolutely beautiful.
Following … Zula is the driving tune, Ride On / Right On, while listening it’s hard to not envision yourself speeding down any highway with the top down and the wind blowing in your hair, without a care in the world, just cruising.  In contrast to track two, this one is nothing but an uplifting tune and far and away one of the standout tracks.  We take a break afterwards though with the still utterly awesome Terror in the Canyon (The Wounded Master), a poetic “fuck you and farewell” to an ex-lover perhaps, it almost plays like … Zula, Part 2, and could very easily fit as such.   The next is another uplifting number called A Charm / A Blade.  The start isn’t a driving tune like … Right On, but the chorus very much is.  I consider this the end to the first half of the album as the remaining tracks are of a softer sort.  Still incredibly stupendous, but a bit slower.  As I type this I’m in the middle of The Quotidian Beasts or The Familiar Attendants, the longest of the 10 tracks.  I’m alone so I’m singing out loud and bobbing my head, so hell, maybe I’m wrong in with that “softer” comment.  The whole album is absolutely stellar and I can’t say much more about it, you’ll just have to experience it for yourself.  Houck does use a lot of sounds that feel most at home on a country album (mind you, I am not a country fan), but with a bottle of whiskey, that’s not always a bad thing.  He’s a poet for this day and age. “You say, ‘Oh, you’ll spin this heartache into gold’ / And I suppose, I aint’ got much choice now do I tho? / See I can’t wake every morning babe / All aching and ornery babe / All jaded and thorny, no, I’m down to go”.  “Hej, I’ve been fucked up.  And I’ve been a fool / But like the shepard to the lamb / Like the wave unto the sand / I’ll fix myself up.  To come and be with you”.  Lyrics like that being built up with fiddles and guitars and horns, oh my . . . incredible.  “Easy oh”.  Standout tracks (seriously, download them):  Song for Zula, Ride On / Right On, A Charm / A Blade / Muchacho’s Tune. 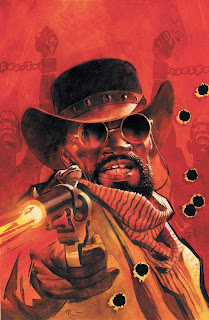 If you’re anything like me, you’re a big Tarantino fan.  The dialogue in every single one of his films is amazing.  The Oscar wins for Django Unchained only back up my claim.  The movie while not his best is very good and Christoph Waltz played an outstanding character.  I enjoyed every line he delivered as he did so with such vigor and intelligence, he inspired me.  I understand the nature of the plot and the use of such dialogue, so while I did not enjoy certain words or phrases, I did understand the direction, time, and necessity for such as to carry a realistic look at that time period.  That being said, the movie is very enjoyable as well as hysterical and Kudos to Jamie Foxx also!  He was great as the title character and I for one am glad Will Smith opted not to play the role.  I remember watching Foxx on In Living Color and The Jamie Foxx Show, both of which I thought were very funny, but after hearing of his upcoming role in the Spider-Man sequel and the development of a horror series on the Syfy channel????? Jesus, this guy is hitting every genre and knocking them out of the park!  I’ll admit, I’ve never seen Ray, but his talent is easily recognizable and I’m kind of excited to see ‘ol Motherfucker Jones return in the Horrible Bosses sequel.  I’ll definitely be picking this one up to add to my Tarantino collection. 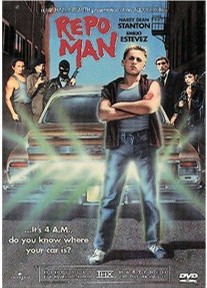 I’ve never seen Repo Man, but after reading the plot summary on IMDB, I’m definitely interested.  Besides, you’ve got to love the Criterion Collection – if only they’d release The Life Aquatic on Blu ray already, sheesh – the extra money is worth it in my book, especially for those Wes Anderson releases.  About a down-on-his-luck guy named Otto (Emilio Estevez) who joins the car repossession business following the lead of Bud (Harry Dean Stanton), the plot makes mention of UFOs and Top Secret cargo so after reading that, I’m sold.  Aside from that, Rotten Tomatoes has certified it fresh at 98%.  I’m gonna go out on a limb here and say that it must be pretty damn good.  Hell, Django is only listed at 89%.  Just tell me where to sign . . . or pick up. 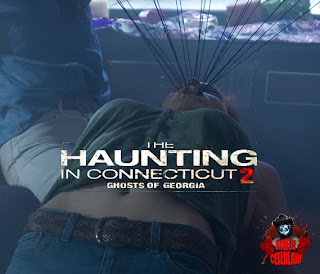 Finally, we have what I can only assume to be a complete waste of anyone’s time or energy, The Haunting in Connecticut 2: Ghosts of Georgia.  I didn’t write the rest of the title above because I feel a wee bit dumber for having written it here.  It’s got to be the stupidest title for anything that I’ve ever heard.  The first in this please-let-it-end-now franchise was actually quite enjoyable, I guess mainly because I could suspend my disbelief because the plot actually took place in the title’s promise.  The same can’t be said here.  At least not anywhere I can find.  I don’t even want to see this movie, I only included it here because I felt like making fun of it.  If you’ve seen it, please drop me a line in the comments box below and let me know how it holds up.  I just cannot get past the title.  It doesn’t make any sense!  Why not call it The Haunting in Georgia like the title alludes to?  I understand if you’re after a different series approach, but for the love of all that is good in Hollywood, don’t try to dumb us down with a grammatical failure in your title!  A proper idea would be to create 50 movies, one based in each state and call each one The Haunting in … leave the number out and don’t list two entirely different states!  I’ve been to both and believe me, they’re different.  Aside from the Atlantic Ocean, there aren’t many similarities.


Anyway, thanks for letting me rant for a bit.  Don’t forget to check out Phosphorescent and let me know how you like him.  See you next week.
Posted by Nick at 9:00 AM

Email ThisBlogThis!Share to TwitterShare to FacebookShare to Pinterest
Labels: by Nick, Tune In Tuesdays