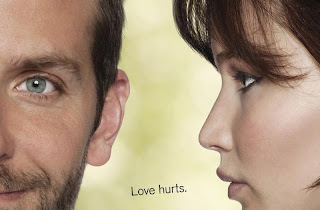 There were plenty of movies that made 2012 a fun night out at the theater, but Silver Linings Playbook was one of the best movies of the year. Not because it was nominated for Best Picture, but because it was a damn good movie. I'm not usually a fan of the Rom Com, but this one had a bit of a twist. Both of the main characters,
Pat (Bradley Cooper) & Tiffany (Jennifer Lawrence), were a tad fucked up. It made the relationship real, uncomfortable and downright hard to watch at some moments, but most importantly it was real.

*** Possible Spoiler Alert***
If you didn't love Jennifer Lawrence as Katniss you should be ashamed of yourself, but I won't hold it against you. Now if you didn't see hearts every time she was on the screen as Tiffany, the recovering nympho, then I just don't know what's wrong with you. She played "hint of crazy" to a T. You never knew what she was going to do or say. I thought for sure she was going to fuck it up at the end when Pat's estranged wife showed up to watch Pat and Tiffany's dance performance. Lawrence deserved the Oscar for Best Actress and I'm glad she won for a secondary reason. It proved that she is not just another emotionless Kristin Stewart. Bradley Cooper shed the pretty boy tag and put in a solid performance as well.

He convinced me that he was Pat. He made me root for him to get better. He made me want him to fall in love with Tiffany. Cooper was nominated for Best Actor and in my opinion he should've won. Fuck Stinkin' Lincoln (That's a Hatch inside joke). Cooper has got a good thing going and I hope he takes advantage of it. I like him as an actor and he could very well be my "exception" guy.

In this scene, Pat and Tiffany have their first "not a date" date and during their small talk, Pat asks Tiffany why she got fired from her job. I don't want to ruin it, so let's day she was a giving person. What I love about this scene is the way Pat acts just like a man when he finds out what she did. Watch Pat's face about 1:32, he can't believe what he's hearing and can only imagine what it looked like. If you haven't seen Silver Linings Playbook, put it at the top of your must see list. It's a Rom Com worth checking out. I hope you all have a great Friday.