Now Hear This!: BE THE VOID 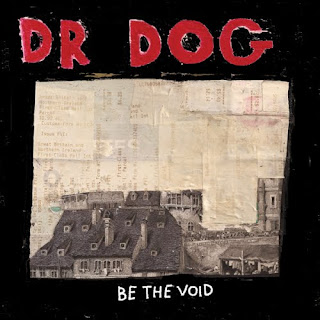 It’s always a good thing when I’ve listened to an album for a week and a half straight and I’m not tired of it. So if you’re done giving the aloof Lana Del Ray a chance, I urge you to jump on board the Dr. Dog train because BE THE VOID is just the palette cleanser you’re looking for. It’s no secret that I’ve expressed my love for this band in the past and at some point it’s just realistic to think that I’m in for a painful let down. Well good for us, we’ll have to keep waiting. The band that brought you Easy Beat, We All Belong, Fate and Shame, Shame,*** delivers once again. I didn’t think it would be possible to continue this run of excellence, but BE THE VOID has everything fans love about this band, the soulful 60’s & 70’s sound, crowd chants, harmonies and it's all done with just the right pinch of quirk. With all that being said, I promise that this won’t be a fanboy review. These guys are the real deal and if you give them a listen I think you’ll agree.

“Lonesome”, one of my favorites, kicks it off. It’s a chugging, chanting song. No doubt, with just the right amount of background “Hey!”, this will be a concert favorite. The song showcases one of the best lines of the album, “And I had my fill of the whippoorwill, when he broke into song I shot him.” I guess I like it because some days I just feel like that.The pace stays up beat with the lead single, “That Old Black Hole”. If you missed it last week, they performed this song on Conan. It was a typical Dr. Dog performance. Never seen them live? I suggest you do, it’s a must. See Conan performance below.

Another gem is “These Days”. It’s a fast paced, 2 minutes and 47 seconds, that sounds a lot like The Strokes, without the Casablancas' sound. I can’t wait to hear this performed live. “How Long Must I Wait?” slows things down just a bit. As usual, Scott McMicken makes you feel the song with lines such as, “I walk with you everywhere I go, but it don’t seem like you know” and later he pleads, “how long must I wait?” “Get Away” builds slowly into an Arcade Fire - esque group harmony, minus 3 or 4 members and a guy running around with a helmet on. Before you go gettin' all, “oh no he didn’t” on me and really I’m just talking to Tiff, I’m a fan of Arcade Fire.

“Do the Trick”, I have one word, cowbell. This one’s a funky jam about finding love or at least finding someone to do the trick at that moment. “Vampire” brings some respect back to the undead. It’s a track about a bloodsucking woman who “destroys all that’s good here at your will.” Speaking of vampires, “Heavy Light” has a bit of a Vampire Weekend sound done Dr. Dog style. If you like keyboards, this track’s for you. “Big Girl” isn’t a favorite. I would’ve rather seen the bonus track, “Control Yourself” here instead. However, it wouldn't work in this spot because as another Dr. Dog fan pointed out to me, "it would mess up the back and forth between Toby(Leaman) and Scott." With flow still intact, check out the video for "Control Yourself" below.

“Over Here, Over There” is another love song with some great lyrics like, “Me and you, two continuous waves. So let us fill the air. We are over here. We’re over there.” “Warrior Man”, my least favorite track on the album, has a pretty cool sound, but misses on the lyrics. I just don’t get it. “Turning the Century” closes the album in true Dr. Dog introspective fashion. There are three bonus tracks. I’ve mentioned “Control Yourself”, but there's also “Exit for Sale” and “What a Fool”. All are quality tracks that very easily would’ve fit into the vibe of the album.

If you go digital and like what you hear, I recommend getting the vinyl too. It includes lyrics and a sweet color. The one, I actually bought for Tiff but is currently in my possession, is blue with red and black specks. For some reason, the album sounds even better as I watch the blue vinyl spin on the turntable. I hope you find something to love on BE THE VOID and if you already have, then you know what I mean by this, “You keep sayin’ nobody cares if I’m here, except me, well baby that’s enough”.

*** Although I really dig “Mystery to Me” and “I Can’t Fly”, Toothbrush was just too raw and lo-fi for my taste.
Posted by Patrick at 5:51 PM