Here we are with another Batch o’ Hatch, and I’m focusing on three upcoming film events that – in my opinion – are great examples of escapism at its best.

While perusing JoBlo the other day, I discovered that Edgar Wright, aka director of Shaun of the Dead and Hot Fuzz aka bringer of joy to millions, is hosting his third film festival at the New Beverly in Los Angeles, Californee December 9th through the 16th. This time around the director is screening films that he's never seen before, which clearly we shouldn't care about because, if Edgar Wright hasn't seen 'em they're obviously not important.

But in all seriousness, I'd love to go to this festival, and I salute anyone lucky enough to attend. If you’ll be there, let me know, I'd love to hear from you about the event. Read more about The Wright Stuff III at Mr. Wright's blog.

This is a pretty simple concept but it still tickles my fancy. All you can eat cheese pizza at screenings of Home Alone! Alamo Drafthouse Cinemas in Austin, TX are throwing the pizza parties throughout December.

A Lebowski Fest will grace the sweet land of Florida on February 10th and 11th and you can bet your pee-stained rug that we’ll be there. I really can’t wait to meet up with other Achievers, watch the flick, and drink some White Russians. In terms of events revolving around and/or tied to films, Lebowski Fest is way up there. It’s a two day fest of drinking, watching the film, and of course, bowling. 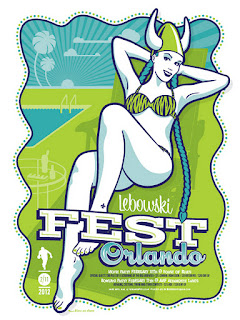