What Happened After…John Carpenter’s The Thing? 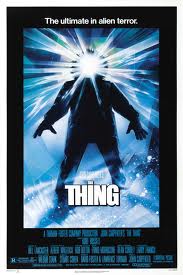 The Thing is king. And its kingdom is suspenseful, creepy, and bloody horror. It’s more than a scary movie, though. It’s a mystery. It’s a thriller. It’s stuffed with social critiques (we as a society inherently fear and mistrust others; we destroy the environment; loss of identity). The Thing is related to the vast number of zombie films out there. The monster isn’t just the thing from another world – it’s us.

If you’re unfamiliar with the film, here goes: An American crew at a base in the Antarctic must battle an alien after it slaughters the inhabitants of a nearby camp and moves on to their own.  The alien isn’t your typical xenomorph, however – it can essentially “infect” any living organism so that it morphs into an evil and alien – yet otherwise physically identical – replica. In fact, the Thing that infiltrates the American base is a Thing-ified dog. Tensions rise and explode when the Americans can no longer tell if their fellow crewmembers are human or not.

The tone of the movie is really what makes it great. The film is claustrophobic – that tiny facility suffocates the characters and us, the viewers. The Thing or one of the assimilated crewmembers could be just around that corner. It's agoraphobic – the characters can't leave the camp – the open Antarctic is nothing but a massive expanse of snow and ice. The Thing could be out there.

One of the great…things…about the film is the beginning – it's so intriguing and confusing to see that helicopter chasing after a lone husky. When we find out that the men from the helicopter were the remaining Sweds Norwegians, the mystery just grows. Although the film makes it clear that the Norwegian crewmembers were either killed by The Thing or during an unfortunate skirmish with the American crew, we'll soon see exactly what happened thanks to this year’s prequel. 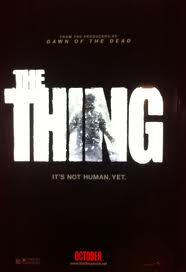 But what happens after The Thing ends? It's nearly impossible to resist wondering. We all remember that MacReady – played by Kurt Russell – and Childs – played by Keith David – were the only two survivors of the ordeal, and when last we saw them, they were exhausted and sitting around their burning base after one final (?) confrontation with the Thing. 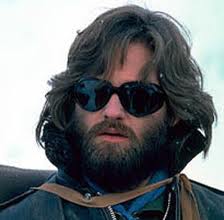 It might be kind of silly to speculate about all this. The whole point is that we have no idea what happens after the film ends. We're supposed to feel the same sort of tension and uncertainty that MacReady and Childs felt.

That hasn't stopped me from wondering, however. It's a great ending but it's also a shitty ending. What the hell happens? We spend the whole movie watching these characters elude Things and then the film just ends. I always really hoped that it wasn't MacReady, but then that might mean that Childs was an alien. If that was the case, MacReady would be alone and, quite simply, fucked.

So this was my initial theory – MacReady and Childs were both still human (and perhaps a Thing lived on). Here's why I thought this. At the end of the film, an infected Blair, a character that wore glasses throughout the whole movie, no longer needed his spectacles. This indicates that the thing does not replicate imperfections.

MacReady and Childs are visibly exhausted and beat up at the end of the film. They’ve seen better days. Therefore, they’re not Things, because they wouldn’t show any sign of weakness.

But I had to throw that idea out the window, for a number of reasons. First of all, if either MacReady or Childs were a Thing, they could have just faked being human. And even though Blair seems to have gotten better as a Thing and the creatures are all visibly much stronger than humans (think of the scene where the Palmer Thing raises Windows up over his head), there’s a problem. At one point in the film, Norris, a character who turns out to have been a Thing, has some sort of heart problem. He’s scrambling to do something and he grabs his chest, visibly in pain. Norris Thing’s heart problem would seem to indicate that the alien mimics organisms so completely, that it recreates their imperfections.

So, my theory about MacReady and Childs not being infected based on their tired states is bullshit, since it isn’t made clear if alien copies reproduce human weaknesses.
What I think isn’t really important, anyway. I’m like any other armchair filmmaker – I can speculate all I want. However, The Thing has been sequel-ized by everything from TV networks to comic books and video games.

For instance, I found out through Wikipedia that SyFy had plans for a miniseries sequel that never came to fruition. In a great script review by Patrick Sauriol at Corona Coming Attractions, we learn that the miniseries would have shown what happened after a Russian team found the frozen remains of MacReady, Childs, (so in this miniseries they died – or perhaps one of them was The Thing and it just allowed itself to freeze again) and The Thing and then used the alien to create a biological weapon. Years after the Russians discover The Thing, a plane with a sample of the alien's DNA crashes in the desert and The Thing begins to infect animals and the residents of a small town.

Dark Horse Comics published some sequels of their own. The comics explain that MacReady was the only survivor of The Thing’s rampage and that Childs became infected. Seems like whoever wrote the comics was a Kurt Russell fan as well. 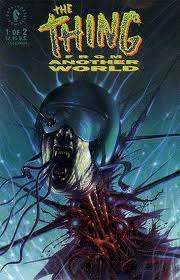 So that covers my speculation and what others did and attempted to do with sequels, but what about something official, something that’s tied to Carpenter’s original film?

Some readers might be surprised that an alternate ending to The Thing was filmed. According to IMDb, the ending showed a rescued MacReady getting a blood test that proves that he was human. Apparently it was just filmed as a precaution in case audiences didn't like the original ending. So while this ending isn't official, it gives us some reason to think that MacReady wasn't an alien. After all, Carpenter could have filmed this alternate ending with Keith David, but he didn't.

But hold on – we can't really say Childs was a Thing either. IMDb also claims that Keith David told a horror convention audience that he was still a human at the end of the film. Said David, "Well, I don't know about (Kurt Russell), but it sure as hell wasn't me."

I know what you’re thinking – “Screw all this other stuff – what does Carpenter think happens after the film ends?” Well, in March 2004, Carpenter reportedly told Empire Magazine that he had an idea for a sequel that would feature MacReady and Childs, both having survived the ordeal. 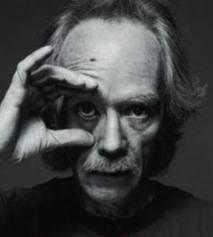 I’d like to get my hands on this Empire issue, because the source of this information (Wikipedia, of course) mentions some odd details about frost bite obscuring MacReady and Childs’ faces to hide the obvious fact that they’ve aged since 1982. That’s a lot of frost bite. I’m sure the CGI de-aging effects that we’ve seen in recent films (X-Men: The Last Stand and Tron: Legacy) could do a much better job than frost bite makeup at this point.


So that’s all I’ve got. A lot of research down the drain and it’s still a mystery. It’s a good kind of mystery, though. Was MacReady a Thing? Was Childs? Were they both still just scared humans, holding on to what little sanity and warmth they had left, hoping that their alien nightmare was finally over? Whatever your theory is, you may never find out if it’s correct. But consider this: given enough running time, prequels can become sequels…
Posted by Robert at 2:15 PM

Email ThisBlogThis!Share to TwitterShare to FacebookShare to Pinterest
Labels: by Robert, Halloween, Horror, John Carpenter, Kurt Russell, Movie, The Thing, What Happened After...