In April Fool’s Day, Muffy St. John (???), played by Deborah Foreman, invites some of her college pals to her quiet, secluded lake house. The diverse group of friends all meet on a ferry, as they have to take the vessel to meet Muffy at the lake house. 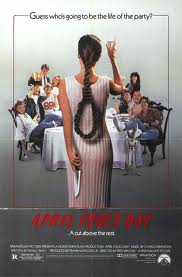 The ferry takes off and all of Muffy’s friends are generally juvenile and goofing off on the boat (spoiler alert – April Fool’s Day is bigger than Christmas in this movie’s universe and everyone LOVES a good prank). Once the ferry gets to the lake house dock, a grisly accident befalls one of the boat’s deckhands and he’s quickly rushed off to the mainland because HISFACEHASBEENCRUSHED. The accident puts the friends on edge for obvious reasons, but also because their pranks were partly to blame. After meeting up with Muffy in the house, however, everyone begins to have a good time and the accident on the boat is all but forgotten.

But then one of the friends goes missing and both tension and fear arise. Is the injured deckhand back for revenge on the goofy friends? Muffy starts to act awfully strange as well. The weekend soon becomes a nightmare as everyone struggles to survive and solve the mystery.

April Fool’s Day is a weird flick, but it’s surprisingly fun in its first half. Some of the pranks throughout the film are genuinely inventive. Plus, Thomas F. “Biff Tannen” Wilson is in the film as Muffy's friend Archie.

Like I said, the film has some oddities. It’s mostly plot points, but acting and writing are to blame as well. At one point, Chaz (Clayton Rohner), a character that occasionally films things and has a hot girlfriend, tells a complete stranger (the deckhand) that his “Hostess Twinkie is hanging out.” When the guy looks down at his crotch, Chaz kisses him on the cheek and walks away.

As I mentioned, the film is fun in its first half, but becomes decently creepy and dark when a twist of sorts is revealed. As I alluded to, it’s also implied that the deckhand is responsible for the creepy goings-on at the lake house, but that doesn’t really make sense since HISFACEHASBEENCRUSHED. This is just me talking, but if my head is borderline destroyed and I’ve been taken to the hospital, the last thing I’d want to do is leave said hospital for revenge.

In conclusion, the film is a good one due to its tone and goofy ‘80s-ness, but just barely, as the story and elements of the writing are pretty oddball.

Side note: Occasionally the EH Team and our crew will find/come up with drinking rules for movies, and this one really lends itself to a drinking game. See below.

Finish your drink at the big toast about midway through the film
Posted by Robert at 8:24 PM