A Peek Through The Hatch: The Walking Dead Season 2

Tonight marks the start of the second season of The Walking Dead. Tune in to AMC tonight at 9:00 EST if you're interested. AMC wants to get you ready for the premiere – if you wanna pick up what they're putting down, head here. 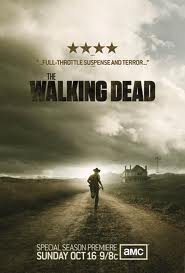 I have to be honest – I wasn't completely wowed by the first season when I originally saw it. It seemed heavy on the character drama and a little lacking in the zombie department. It just didn't really seem to go anywhere – both literally (after a group of characters including Sheriff's Deputy Rick Grimes (Andrew Lincoln) triumphantly escaped Atlanta, they went right back there in the next episode) and plot-wise. Certain things were left hanging, and not in a cliffhanger way – it just seemed like they were forgotten. A character gets stuck in Atlanta and then goes missing (Rick and the others returned to Atlanta in that one episode to find him) and the fate of the father and son duo that initially rescued Rick at the start of the show was left unresolved. A smaller complaint is that the show premiered on Halloween – it was a great way to cap off the scariest month of the year but it seemed a little wrong to watch 90% of the show after the Halloween season had ended.

I've re-watched a few of the first season's episodes, however, and I've realized that it's better than I first thought. I just hope that this new season (which seems to feature plenty of zombie action) wraps up some of what the first season left hanging. And I'm glad that it's premiering with a few weeks of October left.

Oh, and I wonder if Stephen King ever wrote an episode for this season...

Email ThisBlogThis!Share to TwitterShare to FacebookShare to Pinterest
Labels: A Peek Through the Hatch, by Robert, Halloween, Horror, The Walking Dead, TV, Zombies