As I’m sure you read a couple of weeks ago, the entire Hatch crew treated themselves to a viewing of the original Fright Night from 1985 followed by the remake, or reboot, or whatever, that opened in theaters on August 12.  After watching both versions that Saturday night, I borrowed Season 2 of True Blood from an old friend, even though I’ve seen it and didn’t like it near as much as the first season, followed by an overwhelming sense to re-watch a “sane” Tom Cruise wax poetic crazy with some vampire lingo in Interview With The Vampire: The Vampire Chronicles the very next day, all I can say is this (with all due respect to John Darnielle who helped me through this very trying time with his very touching song):  Goddamn These Vampires!


Three days after the original Fright Night was released in theaters, I turned three.  Try as I might to catch it on the big screen, my efforts deemed all for naught.  Don’t despair though, if my foggy memory serves correct, I saw it sometime in those wee early 90s . . . and it perturbed me to say the least.  The entire movie was so overwhelming to my 9-year-old mind that I couldn’t help but to have a nightmare.
Everything was illuminated in red and somehow the house I lived in had been overrun with fucking vampires.  The suckerfuckers were having a marvelously devilish time watching TV of all things (Hello, Subconscious?  Yes, we have a call for you …) and mocking the fact that the rest of my family was nowhere to be seen.  The suckerfuckers tried to make me suck some blood, but I resisted with all of my might.  And they laughed and laughed and laughed.  All of a sudden I wriggled my tiny arms free only to have the suckerfuckers leaping after me.  I was too quick though because I made it out the front door, found a hiding spot still too close to the house and the blood, and . . .
Long story short, I pissed myself awake.  Fuck you, I was 9, and that dream was frightening.
Anyway, I hadn’t seen Night in its entirety since, but as I sipped my beer and gazed at Robert’s shitty TV screen each scene would seep up from the darkest recesses of my memory.  Amanda Bearse, or Marcy Fuckin’ D’Arcy as we like to refer to her in the Hatch, whining about sex; our hero Charley Brewster (William Ragsdale) witnessing an obligatory tit shot right next door from the comfy recliner in his bedroom; the farce that could only be Roddy McDowall as the penultimate “Vampire Killer”; and the repugnant absurdity that Stephen Geoffreys unfortunately displayed as “Evil Ed” Thompson (Charley’s best friend) all came flooding back to me.  Turns out it wasn’t the horror that overwhelmed me as a kid, it was the sheer cheesiness of it.  I was bored twenty minutes in and “Evil Ed’s” overall “being” disturbed me . . . maybe that’s why it freaked me out as a kid.  Bastard.
A source close to the Hatch revealed that Stephen Geoffreys eventually found himself in gay porn.  I’d venture to say the industry got the bad deal.
Each time Marcy Fuckin’ D’Arcy spoke, I longed for Al’s cunning chicken comment.  Alas I never heard it and that just made me drink faster.  When Jerry, the next-door-vampire, throws a half eaten apple towards the shrub to shake Charley out from behind it, I nearly lost it.  The scene is plumb dumb.  If you’ve seen the movie, you know what I’m talking about and if you haven’t, the scene is about twenty minutes in, maybe less, and well worth watching (couldn’t find a link).  One last thought on that ridiculous scene:  Why the fuck is the vampire eating an apple in the first place?  The only thing I can think of is, maybe, possibly, original sin?  Jerry, the vampire, is enticing Charley, the feisty teenager, into biting his apple . . .  Well I say hogwash to that and wipe my ass with the scene so let’s move on. 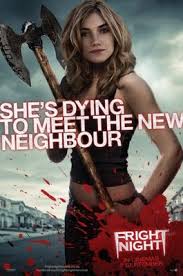 When comparing the two films, the remake reigns supreme for three simple reasons:  a) the acting was better, b) the actors were prettier, and c) the special effects were cooler.  There were a lot of similarities with the original that I noticed, but what I didn’t notice was an overwhelming cheese factor.  I don’t find it difficult to say the “acting” craft has only progressed over the decades.  Colin Farrell doesn’t necessarily strengthen my argument, but I’m willing to secede that he made a much more convincing bloodsucker than Chris Sarandon did.  Case in point, Colin only bit the apple while passing through the background of the scene while Chris focused his character’s entire performance around that goddamn apple.  Hell, I’d say the apple wound up stealing the scene.  Maybe I’m being too rough, it was 1985 afterall.  And KUDOS to David Tennant’s performance of the Peter Vincent character (sod off, Roddy!).  It was comedic yet I believed it unlike Roddy’s portrayal of the character in which I felt like I was being fucked with by Mr. Tom Holland (the director).  I’d also like to applaud the casting of Christopher Mintz-Plasse as “Evil Ed”.  I’m happy to report that there is no fingernailsdownachalkboard laugh protruding from icky lips and it really makes the whole experience that much more enjoyable.
Obviously the actors are prettier these days, I mean come on.  Comparing Marcy Fuckin’ Darcy to Imogen Poots (hehe, poots) is a moot task.  I will say though that saying ‘Marcy Fuckin’ Darcy’ is much more pleasing to the tongue than saying ‘Imogen Poots,’ regardless of the reference.  Toni Collette gives an alright performance as Charley’s mother and far prettier to the eye than Dorothy Fielding was (no picture on IMDb, hmm?).  I’d also like to add that Sandra Vergara, Modern Family’s Sophia Vergara’s sister, and Emily Montagure played the characters of Ginger and Doris very nicely.  Ah, who am I kidding?  I don’t remember them, but I’ll stand by my word nonetheless.  I do have to throw in my only qualm though, and that is the lack of the obligatory tit shot.  There I am, 3D glasses galore, and no tit shot?  No, I can’t.  I can’t ramble on this topic, writing this alone is making me ponder Shark Night 3D and its lame ass PG-13 worthiness.  I don’t know, I guess when that Twilight bullshit hit theaters tits became unnecessary in vampire films.  And to that I say, boo.
Finally, the 3D effects were the tits!  Had I seen it in 2D, I wouldn’t have enjoyed it as much.  When the first vampire exploded into a darkened cloud of ash, I literally said, “Whoa.”  It might have been the beer in me, but I was transfixed.  Robert mentioned the “darkness” of it and how all 3D movies are generally “dark” but I didn’t seem to notice.  I like 3D movies. 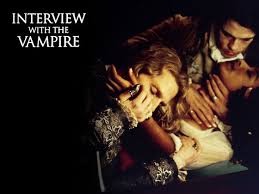 Better than both movies though is Interview With The Vampire:  The Vampire Chronicles.  As I watched it again for the first time in a long time I noticed a few things:  a) Tom Cruise is crazy now and then, b) the soundtrack is very good, and c) my favorite vampire movies focus on depression.  Hearing Tom’s voice peak at the common level displayed in nearly every one of his films instantly made me think of the Oprah episode.  I don’t think I’m alone in this opinion either.  I’m not sure I can ever take him seriously moving forward.  I liked him in Tropic Thunder, maybe if he continues on that route I can learn to at least accept him.  Now don’t let the negative connotation on ‘Ol Crazy Tom fool you into thinking I don’t like Interview . . . cause I do, if for no other reason than for Brad Pitt, who gives a stellar performance.  He carries the movie as he was meant to do and it’s a good thing because nowadays Tom obviously lets me down.  And that sucks because one of my favorite movies is Vanilla Sky.  Yes, I realize I’m pretty much alone with this opinion and that’s okay.  I accepted the fact a long time ago.  It’s a good movie though and it’s got a killer soundtrack although most of the goods can only be heard while watching the movie.  Cameron Crowe introduced me to Sigur Ros when Vanilla Sky came out and I find that a hard gift to repay.
The soundtrack to Interview . . . is mostly instrumental, but I’m fan of that kind of shit too so I’ve always dug it.  I remember wanting the buy the CD after I’d watched the movie for the second time, but I never bought it and to this day still do not own a copy, much less have it on my iTunes.  I do have Guns-N-Roses’ cover of Sympathy For The Devil but to be honest I don’t listen to it very often since I’ve got the original further on down the list.  It’s hard to upstage the Stones at what I consider to be the height of their career.  Maybe I’ll buy a used copy of the soundtrack on Amazon.  It’s literally only a penny, plus shipping.  Not a bad deal.
My two favorite vampire movies are what we’re talking about here and Bram Stoker’s Dracula.  Again, I realize I’m most likely alone with this idea, but both of these movies focus on the kinds of depression a vampire can go through.  Be it the loss of the vampire’s human life and the reluctance to pursue, kill, other humans to live or the aloneness of not having an everlasting companion.  That’s what interests me about vampires . . . that and the sex.  Fright Night (both of them) is fun, The Lost Boys kicks ass, but neither have me leaving the theater or TV saying, “That was a really good movie.”  I like a little drama in a vampire movie, not sparkling drama, but drama.  I haven’t watched Season 2 of True Blood yet, but when I do, I hope it sparks some sort of interest for me this go ‘round.  Aside from the sex.
Posted by Nick at 10:52 AM