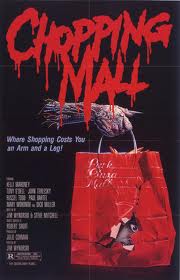 Chopping Mall, a flick Netflix suggested to me, resides in the glorious subgenre of shopping mall horror, along with Dawn of the Dead, Dawn of the Dead (2004), and Paul Blart: Mall Cop. Released in 1986, the film follows a group of horny teens trying to escape from a mall’s robot-security-force-gone-haywire.
The group, which includes innocent girl Alison and nerdy Ferdy (the poor man’s Rick Moranis), stayed in their local mall after hours to party and get laid. Unfortunately, the mall’s advanced security system – three armed and dangerous robots – has gone murderously haywire, thanks to a freak lightning storm. It isn’t long before the robots are cruising through the mall, picking the teens off one-by-one.
The film is ridiculous for many reasons. For example, once the teens realize they’re stuck in the mall (all of the high-tech doors are programmed to lock down after hours) and being chased by the robots, they spend a lot of time setting up explosive traps for their attackers. Why not use all the explosives you found to just bomb your way out of the mall?
The shopping mall looked familiar, specifically, it looked like the mall that Arnold Schwarzenegger briefly tears up in Commando. And indeed it is – Sherman Oaks Galleria in Los Angeles. Which leads me to ask – what the hell kind of stores existed back in the ‘80s? If you watch the film, you’ll notice all kinds of shops with odd names, such as “House of Almonds” and “Ch-baker.” Although a store that the fellas arm themselves in is called “Peckinpah’s” which is obviously just a nod to the filmmaker, so maybe a lot of the shops were just made up.
The robots – “Killbots” as they’re known by the filmmakers (Killbots was also the original title of the film, apparently) – while not as poorly designed as you’d think, are still pretty bad. They sort of resemble a mix of Johnny 5 and the Cylons from Battlestar Gallactica. They scurry about the mall on their treadmills, shooting the teenagers with all sorts of lasers (although one type basically looks like ectoplasm rather than a laser blast) and robotically droning “Thank you, and have a nice day,” after they’ve killed a victim.


What’s odd about the film is that the acting isn’t that bad. Alison is played by Kelli Maroney, a girl you might recognize from Night of the Comet, another cheesy ‘80s horror film. Nick pointed out that Alison eerily resembles a daughter of Marcy D'Arcy. A lot of the characters die in nasty ways – Leslie (Suzee Slater), the obligatory party girl of the group, gets her head blown off by one of the lasers. You’d think I’d include that video here, but that’d be too easy. Instead, feast your eyes on one of the goofier kills, when Rick (Russell Todd) valiantly plows into one of the robots with some type of mall cart. “Damn the torpedoes – ramming speed!”
One last notable aspect of the film is that it features more scenes of people (and robots) crashing through plate glass than I’d ever seen in my life. The robots crash through glass trying to get the teens, the teens crash through more glass to get away, etc. The title of this post comes from a scene at the end, when Alison just straight up covers her head with her arms and rams through a paint store’s glass wall  (ignore the commentary, although whoever made it sounds like they were having a good time).


It’s like the filmmakers got tired of coming up with ways for people to break through glass and said “Fuck it, just have Kelly walk through it.”
So in conclusion, I award the film neither a good rating (open hatch) nor bad rating (closed hatch) because, while it may be really bad, it’s The Room bad. Also, I haven’t made a picture for a closed hatch rating. I’ll get to it.
Posted by Robert at 5:31 PM