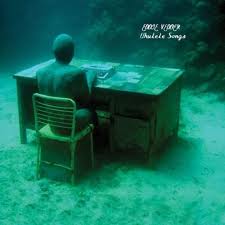 I firmly believe there are two types of people in this 21st Century world: those of us of who rock out with our cocks out for anything Pearl Jam does and those of us who merely prefer the voice of Eddie Vedder on a sunny, Sunday afternoon. I easily fall among the latter, but if push comes to shove, can fit in well enough with the former as well. My older brothers, five years my senior, grew up with the Ten album on constant play and I certainly didn’t not like it, but when I heard the plucking of the ukulele strings on the song Rise from the soundtrack to the film Into The Wild for the first time, Eddie hooked me in a new way I never conceived possible. His ragged voice has never seemed distant to me and a particular concert version (of which, I honestly do not know) of Yellow Ledbetter nearly floors me every time, but there’s something about Eddie performing alone, and in this case with a ukulele, that makes me believe that he is singing, specifically, to those of us who find intimacies in the albums we listen to because we’re searching for intimacies in the first place.

This album was made for a summer day of re-syncing with the world. Maybe it’s my Floridian bias, but nothing beats a mature Sunday afternoon sitting blissfully with a beer and whatever else may tickle your fancy and the right kind of tunes to ease you back into what will soon be another grueling workweek. Eddie has given us those tunes. Upon first listen I couldn’t help but to picture my father floating in our 4-foot above ground pool on a Dollar General inflatable raft with his can of Milwaukee’s Best Light. At the time, Chicago or Blood, Sweat, and Tears did for him what Eddie will now do for me. Now I patiently await the collaboration between him and Ray Davies. I was admittedly upset when I didn’t see Sunny Afternoon on the See My Friends album. Perhaps the track was scrapped because Eddie was working on this album and didn’t have the time. Wishful thinking, I know, but wouldn’t it be something to hear him and Ray do Sunny Afternoon? This is the sort of thing I think about when talking on the phone . . .

As mentioned before I enjoy the Into The Wild soundtrack and I’m happy Eddie had the chance to put the Jam aside for a minor beat to see what could be. You have to respect him for that, no? I’m nearly positive a slew of loyal Jam followers reciprocated distaste for the direction of that album and no doubt Ukulele Songs will do the same, if not moreso, but I for one applaud it.

The depiction of the coverwork alone hits me right where I live as it reminds of an important clue that should have been discovered among the remnants left behind by the Dharma Initiative. There are 16 tracks comprising the 35 minutes it takes to get from start to finish. Eddie wrote all but five. I had never heard any of the covers, save for one, as I never heard of the songwriters (hell, the youngest track was written in 1960), but they didn’t sway the momentum, oh wait, I should say relaxation, of the album as a whole. The eerie take on Dream A Little Dream Of Me could have been used in Insidious. A perfect end to such an album. Only two tracks surpass the three minute mark and as that might disappoint some folks, I say don’t worry about it, any longer and the album wouldn’t be as encompassing. After all, Tyler Durden is right, “A moment was the most you could ever expect from perfection.”

My favorites, aside from … Dream Of Me, are Can’t Keep, the opener which pretty much lays out what the other 15 tracks will represent; Sleepless Nights, another cover that stands out; Satellite, I admit my first thought was Dave Matthews Band cover? Alas I was wrong, but it’s still a cool track. Light Today stands out because I like what the lyrics represent, plus you can’t beat the ebb and flow in the background. Broken Heart kind of reminds me of an early Tom Waits or Bob Dylan, lyrically speaking of course. The rest makes up what I left behind in this article. The lyrics may seem sorrowful to some, but I take them more as a reflection of real life. It’s as tough as tough can be and it never gets easier in the long run, it builds and builds and then all comes crumbling down, but in between our eyes and our dreams there stands a tranquility that melds the entire world into a single scene. So let’s put our feet up and let what will be come to be, just take it easy, if only for a moment. Savior it. Embellish it and seek it forevermore for that’s what we’re all searching for.

When the album finished I felt relieved even though I wasn’t overwhelmed in the first place. Needless to say the feeling came on doubly potent. Give you an example, you ask: well this is literally my first thought, and first sentence, of anything having to do with the word ‘work.’ Ahh . . . . .

P.S. Does anyone else think that Eddie could pass as Jeff Bridges’ younger brother?
Posted by Nick at 7:14 PM