Suck It and See - The Review 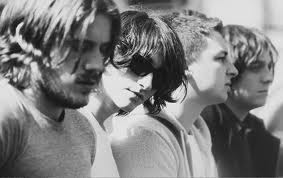 "Bite the lightning and tell me how it tastes"
Any time one of my favorite bands, (definition: favorite band - a band that I will actually carry my sorry ass to the store to purchase their album), releases a new album or song I’m always optimistic. I give ‘em a chance and try to find something that I like, understanding that it has to be difficult for artists to continue to put out creative, high quality music over their entire career.

However this open door optimism has burned me in the past. Most recently with Slipknot’s 2008 release of All Hope is Gone when Corey Taylor went all “Snuff” on me and then in 2010 when the Followill’s decided to channel their inner Buffet/Chesney with Come Around Sundown. Now if you are a huge music fan like I am then, like me, you have been disappointed or heartbroken before. I guess the devotion to our bands is kinda like a relationship that you know is going badly and if you would just take a step back you could see it, but for some reason you try to hold onto the last salvageable parts that make you feel good. Speaking of holding on, I promise my review is coming.

So I was asked the other day by a friend, “what are your guidelines to actually purchasing an album?” I didn’t take much time to think and quickly answered, “an album with seven solid singles.” I know this is a very high standard, but in the era of iTunes, why in the hell am I going to throw down $10-15 for a horse shit album with only one or two great songs? Now that I’ve had time to think, I will drop it down to six and would even consider five, if those five are completely unstoppable, kick ass songs.

With all that being said, my favorite bands are exempt from this prerequisite and the Arctic Monkeys are my favorite band. So on Tuesday I pulled into a big chain store (sorry independent record stores) and threw down an inexpensive $8.55 for Suck It and See. I have to admit. I was a little worried that too much of Alex Turner’s solo project, the soundtrack for the movie Submarine and his side project The Last Shadow Puppets, would bleed into Suck It and See and for the most part it did. The same thing happened with Corey Taylor of Slipknot and Stone Sour. I scratch my head when artists have side projects and eventually the original band starts to sound like the side project. ***

Not that this is a bad thing for the Monkeys because whether he’s in your face or purposely cryptic, as always Turner’s lyrics still shine through. Here are some examples:

“And I don’t mean to rain on anybody’s cabriolet, one of those games you’re going to lose, but you want to play just in case.”

“The type of kisses where teeth collide, when she laughs the heavens hum a stun gun lullaby”

“And did you ever get the feeling, that these are things she’s said before, her steady hands may well have done the devil’s pedicure.”

“When I’m pipe and slippers and rocking chair, singing dreadful songs about summer, will I have found a better method of pretending you were just some lover?”

“That’s not a skirt girl, that’s a sawn off shotgun and I can only hope you’ve got it aimed at me.”

Well written lyrics are nice and everything, but like most men I tend to like the Monkeys’ harder stuff and that is what is missing from Suck It and See. The first two singles from the album, “Brick by Brick” (unofficial release) and “Don’t Sit Down ‘Cause I’ve Moved Your Chair” (official release) do not represent what Suck It and See is about. From the start, this album doesn’t have the frantic, raucous, nightlife feel of Whatever… or Favourite Worst Nightmare, nor does it have that total commitment to the Queens of The Stone Age influence of Humbug. Suck It and See for the most part is it’s own beast. It’s an album packed full of slow to mid-tempo pop/rock songs (think “Riot Van”, “Do Me a Favour”, “505”, “Cornerstone”, “My Propeller”, “Joining the Dots” and “Catapult”). All very good songs, but when fellow Escape Hatch member Tiffany asked me, “where is my Crying Lightning?” I regrettably had to say you’re not gonna get it. And although they’ve gradually lost that fast paced punk sound that dominated their first two albums, I’m fine with it. I love Turner’s voice, the heavy drum play of Helder’s, the catchy bass lines of O’Malley and the vintage sound of Cook’s guitar. Now to the review:

The opening song “She’s Thunderstorms” begins with a guitar riff that leads you to believe that you might get your face get ripped off, but Turner’s crooning pipes quickly take away any of those thoughts. It’s a safe start and a quality song. As usual, Helder’s heavy drums grab my ears and won’t let me skip to the next song. The slow pace continues into track 2: “Black Treacle”. Another slow pop/rock song that the Monkeys do so well and from what I saw on iTunes the fans are gobbling this one up. They pick up the pace with “Brick by Brick”. A mix between 60’s rock and the Josh Homme influence. With track 4: “The Hellcat Spangled Shalalala”, Turner spins a tale of a temptress who’s bound to make you pay.

The boys throw me a bone with “Don’t Sit Down Cause I’ve Moved Your Chair”, a sludgy up temp groove. Love the music, but the lyrics are lacking. I told you about the :40 second mark of this song, if that doesn’t pump the juices, check your pulse. On track 5 when they do attempt to get loud, it only lasts 2:22 with “Library Pictures” (this has already moved into my top 5 all-time A.M. songs). Ladies out there, you’re probably saying 2:22! What are you complaining about? That’s one minute longer than usually. Well now I can empathize with you and for that I apologize.

That’s where the heavy ends and Suck It heads into heartbreak/love song mode, but don’t turn it off because you’ll miss some gems. “All My Own Stunts” starts off the second half of the album. Homme sings back up and it’s become a quick favorite. Track 8: “Reckless Serenade” is not “Cornerstone” but with lyrics like, “Called up to listen to the voice of reason and got his answering machine. I left my message, but did he fuck get back to me, now I’m stuck still wondering how it’s meant to be”, Turner takes us to a place most of us have been before. The final four tracks, “Piledriver Waltz”, “Love is a Laserquest”, the title track and “That’s Where You’re Wrong”, round out an album that might drive the Whatever… crowd into a full on “benny”. For those wanting to get some of that early punk back, check the “Don’t Sit Down ‘Cause I’ve Moved Your Chair” single tracks: “The Blond -O- Sonic Shimmer Trap” and “I.D.S.T.” (on the latter tell me you don’t hear AC/DC.)

As has been the case with the Arctic Monkeys previous two releases, they give us a new direction without totally losing the old Monkeys we have come to expect. Does Suck It and See meet my seven song requirement? Not right now, but it will because only one song doesn’t hold my attention and that is “Love is a Laserquest”. You can’t say that about too many 12 track albums nowadays.

Bonus: Lyrics included as well as a bad ass picture of Helders wearing a motorcycle helmet and roller blades. (I’m guessing one too many bottles of Carlsberg)

*** I know smart asses. Corey Taylor was in Stone Sour before Slipknot.
Posted by Patrick at 9:46 AM

Email ThisBlogThis!Share to TwitterShare to FacebookShare to Pinterest
Labels: Arctic Monkeys, by Pat