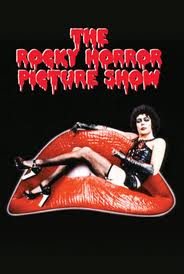 I like the 5-Points theatre in Riverside. I really do. Where the suds flow, the movies glow and, at least during the Rocky Horror Picture Show, the narrators blow. We all know what the Rocky Horror Picture Show is and we all know that it’s shown across the United States and overseas with the pleasures of audience participation. What’s not very well known is how utterly annoying the experience is when only the two – call them narrator’s if you dare – are the only ones participating. Like the leaders of a lame team-building exercise our narrators tried their damnedest to (re)create the magic that is Rocky Horror. Alas they did not.

The movie itself is fantastic. Anyone who’s ever seen it can agree in one way or another: be it the music, “Time Warp” is distinct favorite of mine that’s had me hooked ever since I first heard it performed by Drew Carey and his friends on the old ABC TV show; the costumes, I must admit the one pleasurable thing about the audience participation was the two girls in their French Maid outfits; the cheesy Bness of the movie in general, I love the laser’s and shit that come out of left field near the end; or the good old fashioned joy of watching a young Susan Sarandon prance around in a wet bra screaming such things as, “Touch me, touch me, touch me . . .”, need I say more? The movie cannot not be appreciated. My only regret is that my Escape Hatch crew, who hadn’t ever seen the movie, couldn’t fully appreciate it with the ensuing malaise of our narrators.

Tim Curry is the true troubadour here, but then again I’m revealing nothing new. Even in his worst roles, Curry is still a delight to watch. I can’t imagine any other actor portraying Dr. Frank-N-Furter with such zest, such zeal, such . . . cheese. As cheesy as the acting may be, it was still was no match for our narrators, we’ll call them Tiny and Douche, and their startling performances. Or lack thereof. Tiny and the enormous belly protruding over his shorts had about the most ungenuine lisp escaping from his lips that I had ever heard. It reminded me of a poor-man’s “Cam,” from ABC’s Modern Family, only not funny and certainly not fun to watch. Or listen to. Or put up with. Douche played the “little buddy” routine to death, always wholeheartedly trying to upstage Tiny, but inevitably doing a horrible job. One couldn’t help but to reminisce of The Room and its brilliant performances. As the movie progressed deeper into the wee-morning hours of May 21st and our narrators continued their “ugh, sigh, blah, blah,” I couldn’t help but to think, Is this the rapture everyone’s been babbling about? Is this how the end begins? Of course I was wrong (along with countless others) but I wasn’t wrong about the horror displayed from these two guys trying to provide us a good time. The crew of To The Escape Hatch unanimously agree: The movie, the fun, the experience, our joy would have been and could have been much better, fun, wow, and high.

I may be coming off a little bitter. I know. I respect the narrators for giving it their all and I know for a fact that I could not/would not lead such a charge. And most assuredly not pull off a “job well done” if forced to. But where is the line? At what point during the 100 minute film do we call it quits and just sit back and enjoy the richness of Riff Raff and Magenta and pre-Apprentice Meat Loaf as Eddie? I daydreamed before sitting down in the theatre . . . maybe ‘ol Dr. Frank-N-Furter would get them this time . . . or what if our bra’d Heroine kicked our Hero in the nuts and took off with Rocky . . . oh, Riff Raff, Riff Raff, devious, sinking raft, one can only speculate what could’ve happened if he’d have gone a little further with the demented Dr. Furter . . . but I digress. My bitterness peaks with the fact that regardless of not being costumed, I may have well been wearing a bulls-eye on my face. I sorta thought the throwing of rice was cool, but it was a shitload of rice. Even one of our Hatchers complained of wiping rice from the bed the next morning. Not to mention the rice thwartily sticking to the hair goop entrenched on Robert’s head. My own kamikaze rice took dive into my fresh glass of beer. And the pitcher. So each progressive pour was accompanied by the little brown bastards. As soon as “GREAT SCOTT!” was shouted on the screen, I got creamed with toilet paper. On the head. It unpeeled as it rolled down my side and I’m pretty sure a portion dipped into my beer. Lime? No, thanks, guy, I’ll take a lil rice and some fucking tp. Why not? It was everywhere by the time it’s boa-constricting nature resolved itself. And it happened with each utterance of “GREAT SCOTT!” Near the end of the movie, glowsticks took flight and one pierced me in my jugular. I think Douche had it for me. I cried out a very loud cussword that shouldn’t be heard by virgin ears and at that point I was done. Ding. I’d had my fill of this Picture Show. By the end, I think the entire Hatch were all ready to get the hell out of there.

For anyone out there still unfamiliar with Rocky Horror I suggest watching it, at least once, alone or with a couple of close friends. It is undoubtedly original and even if you’re not into the whole “Transsexual Transylvania” motif, let it teach you a lesson of what could be out there in the deepest, darkest, wetest reaches of these blessed United States of America. Also keep in mind though the Rocky Horror Picture Show was officially released in 1975, one can only ponder of what’s evolved from such acts over the past 36 years.
Posted by Nick at 7:23 PM