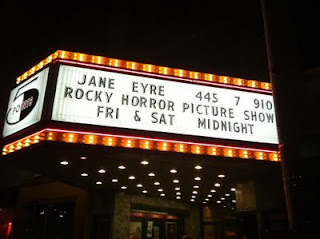 Until recently, I had never seen The Rocky Horror Picture Show – at all. I knew it existed, and I knew that it had a cult following, but I had never once watched the film. Similarly, it wasn't until recently that I discovered that hardcore fans hold midnight screenings where they engage in heavy audience participation – there's basically a script for the audience to go along with the movie, and props are used throughout the film.

The Escape Hatch crew and I decided to check out this phenomenon at a midnight screening of the film at 5 Points Theatre. Nick, who had actually seen the film before, sat next to me and served as my guide in a way.

Most people are probably familiar with the plot. On a dark and stormy night, a young couple (Janet Weiss [A Heroine] and Brad Majors [A Hero]) are forced to take shelter at the castle home of Dr. Frank-N-Furter, a self-described “sweet transvestite from Transsexual, Transylvania.” Janet and Brad end up in their underwear a lot, singing and dancing ensues, and a creature named Rocky Horror is brought to life. Basically, odd, sexual things happen.

I'm pretty sure I enjoyed the movie. It's hard to gauge since it was my first time (teehee) and it's such an extreme way to experience a movie for the first time. And I had been drinking prior to the movie. And I drank during the movie – gotta love that 5 Points beer on tap.

I'm not necessarily a fan of musicals, but I enjoyed the songs for the most part. "The Time Warp" is pretty well known and the performance in the movie is fun. However, Nick turned to me shortly after the number ended. "Unfortunately, that's the best song."
Like I said, the audience is welcome to participate along with the movie and props are pretty much a necessity. Two, err, intense dudes moderated the evening and the audience participation. Before the film started they performed a little. Some raucous, raunchy songs mostly, featuring members of the audience (virgins to the whole experience – luckily they picked these people before we arrived – I'm not sure how I would have enjoyed standing in front of dozens of strangers while two guys sang to me about my penis).
The duo, along with some members of the audience, yelled out the audience lines throughout the film. I didn’t really care for this part of the experience, but to be fair, it wasn't necessarily the guys themselves or the fact that they were yelling. It was that I had no idea what they were saying most of the time. It was all just really, REALLY loud gibberish to me. Maybe if I was more familiar with what they were saying or the process in general. Or maybe if it was just one guy and he had a microphone or something. But the guys had a lot of fun and I can imagine that loud moderators are a staple of the midnight screenings. I digress.
The other big component of the midnight screening is the use of props, and I liked this aspect a lot more. For example, there's a wedding at the beginning of the film, and when the guests throw rice at the newlyweds, people in the audience throw actual rice everywhere. I was still picking it out of my hair the next day. Something that wasn't allowed at our screening was squirt guns. There's a scene featuring driving in the rain, and you're supposed to squirt your water gun all over the place.
At one point, and I'm not sure of the cue, people began throwing rolls of toilet paper. This is when Nick started getting hit in the head a lot. I have to pay him respect, as if he hadn't been sitting next to me, I would have gotten hit instead. Plus, it was pretty hysterical.
During one song where lights are mentioned, people started shining their phones and glow sticks. They even threw the glow sticks around (Nick got hit) and I was able to snag one for myself, although I'm not sure what happened to it. I read on the all-seeing, all-knowing IMDb that lighters were used back in the day instead of artificial lighting – 5 Points didn't allow this, for obvious reasons.

I'll be honest, the film dragged on for a while and I got a little restless. The second half of the film is a blur of Meatloaf, Dr. Frank-N-Furter boning Janet AND Brad (separately), and zaniness in general.

In conclusion, I had a good time but not a great time. The midnight screenings might just be a little too esoteric unless you’re a diehard fan of the film. That being said, some sort of microphone system for the hosts might have made the whole experience more enjoyable. And a helmet for Nick would have been great too.
Posted by Robert at 11:56 AM