It's Friday the 13th! That's a date with scary connotations, so it seems only right that this week's FSF look at the horror genre, but seeing as it's landed on my designated monthly slot don't go expecting anything too horrific. The obvious choice here would be to look at something from the Friday the 13th franchise, but seeing as how I've never seen any of those films, we'll instead be looking at one of my favourite almost-horror franchises, Final Destination, and in particular the spectacular sequel, Final Destination 2. 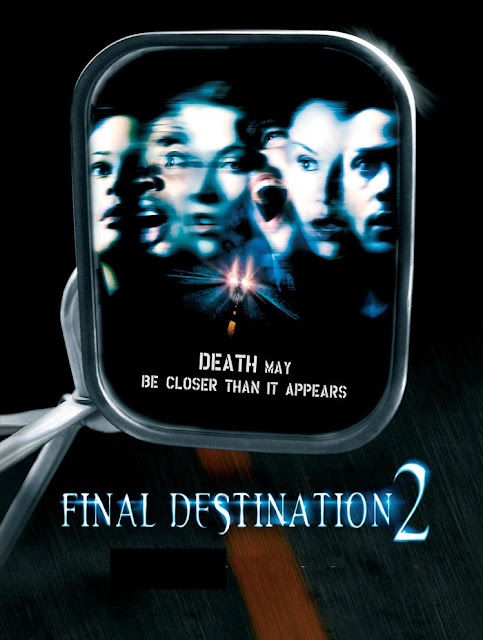 If you're not familiar with the Final Destination franchise, they all begin with some form of premonition by one of the main characters of an upcoming catastrophic event that sees them, their close friends and numerous others being killed in horrific ways, before the premonitionee (not a word) awakes from their vision and prevents said catastrophe from occurring. Death - in the form of a mysterious puddle, improbable wind or flock of pigeons - feels cheated from the claiming of these souls, so sets out to pick the unplanned survivors off one by one in a designated order, with numerous mini premonitions seen along the way. The first Final Destination established the rules - in death there are no accidents, the order you get killed is the same as the order you would have died in that initial vision - but Final Destination 2 added an utterly arbitrary twist for the benefit of no-one but the audience - this time around the deaths happen in reverse!

FD2 is my favourite of the franchise, mainly because it has the best, and often the most ludicrous, death sequences. My actual favourite scene from the whole series is the opening car crash pile-up - I will not drive behind a truck carrying logs, this is something that will never happen - but here I'll be looking at one of my top individual death sequences, the first one in fact, concerning lottery winning douchebag Evan (David Paetkau). Here it is:

So why is this my top death scene from the entire franchise? To be honest I'm not saying it is - there are some stellar ones across the board, and I'd need to re-watch the whole series making notes to really put that list together - but this would definitely make the top 5. What I love about it is how many fake-outs there are, how much fun the director and writers had playing with audience's expectations. It's within this scene that they establish there really aren't all that many rules in this franchise, other than everyone will die in as ludicrous a manner as possible.

Let's break down how Evan kicks his bucket: He's just won the lottery, and as many of us would do he's treated himself to something of a shopping spree. After tossing his old spaghetti out the window he begins preparing a frankly vile looking meal, before checking out his new bling - a chunky gold watch and diamond-studded horseshoe ring. Suddenly the microwave sparks - a magnet fell into his noodles - and he drops the ring down the sink. Being an idiot, Evan reaches down the drain with the new watch on his arm, only for it to get stuck as the microwave continues to spark and the pan on his stove catches fire, spreading around his apartment. It looks like Evan will perish by being burned alive whilst trapped in the sink, until he miraculously frees himself. He grabs a fire extinguisher, but the fire is too large to handle, then the windows all slam shut and Evan is unable to open them - to be honest I've never loved that detail, it feels very forced - so he throws a chair through one instead. Just as he climbs out the window onto the fire escape, the apartment explodes, but Evan remains unharmed. At this point he's gotta be considering himself pretty blessed, right? He's won the lottery and escaped death twice, all in the space of a few days. He descends the fire escape ladder, but when it sticks and he throws his full weight against it he falls, but lands safely, only to slip onto his back on that spaghetti he threw out earlier that we'd all forgotten about. He lands on the broken glass, head directly below the ladder, which suddenly breaks free and falls, stopping inches from his face. Evan exclaims "JESUS CHRIST!," assuming he has once again survived something miraculous, only for the ladder to jerk down into his eye socket and through his brain. Lovely.

What I love here is the little details. The magnets on Evan's fridge spell out "Hey E" until the "H" falls into the noodles, at which point we get the foreshadowed "Eye" as a clue to how Evan will die. It's a pretty vague clue, but I like it nonetheless. Also, the voicemail messages Evan is listening to whilst stuck in the sink are terrific. They're from a couple of girls who presumably wanted absolutely nothing to do with Evan - neither has seen him for some time - until they discovered he won the lottery, and they seem to have no ability to be even slightly subtle about their gold-digging intentions. My favourite element though is how Evan dies in a similar manner to the opening crash sequence. There, he narrowly avoids being decapitated as his new sports car gets turned into a convertible by the truck passing overhead, only for him to get trapped in the burning car, unable to free himself from his seatbelt. Just like in the kitchen, it looks like he'll be burned alive whilst unable to escape, that is until the giant truck appears behind him, ploughing through his car like a ladder through an orbital socket, as the saying goes. Later in the film we get death by air-bag, elevator and fence, and the franchise attempts other demises via car-wash, tanning bed, gym equipment, nail-gun, massage and a completely different kind of fence, but Evan's ladder will always be one of my faves.