Tune in Tuesday's: Bring Out Your Dead!

Are you excited for the opening of James Wan’s The Conjuring this Friday?  I know I speak for the entire Hatch when I say that we most certainly are!  In fact, we’ll be catching a special sneak preview tonight FOR FREE!  My excitement meter is officially tapped, because awesome new horror movie aside, today also grants us the Blu-ray release of director Fede Alvarez’s Evil Dead reboot/remake/remaster/reawesome take on Sam Raimi’s 1981 original classic!  We were a little on the fence about this redo when it was first announced way back when, but our fears about a shitty take on a classic were pleasantly put at ease when we saw it in theaters back in April on opening night.  Marking the fourth film in the franchise (and the only one not directed by Raimi) could’ve been cause for scare also, but I’m happy to report that Alvarez did an excellent job. 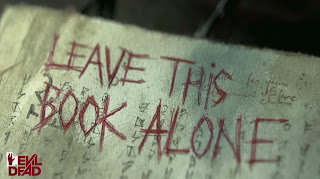 What this ’13 version lacks in contrast to its 80s predecessor, and its two sequels, is the cheese factor and I’ve got to admit, I was the happier for it.  I love cheesy horror flicks, I really do, but even more, I love serious, frightening horror flicks.  Evil Dead is just that.  Gone from this version is Bruce Campbell’s delightfully mad Ash sporting his trusty-handed sidekick, “Boomstick Baby”, and instead we’re treated to “far cry away from the character she plays on that shitty ABC sitcom, Suburgatory,” Mia, played wonderfully by Jane Levy.  So right from the get-go we know this isn’t just a retelling; what it is though, is a bloody good shout-out to the genre in general.  Alvarez does away with the cheesy gimmicks and lines of the original trilogy, i.e. dyed green cream corn, Henrietta, the entire Army of Darkness movie . . .,

“Someone’s in my fruit cellar!  Someone with a fresh soooul!”

All are very funny, but Alvarez gives us what I personally wanted in the first place:  true, bloody, disgusting, gut-wrenching horror.  Now I don’t mean to lead you to believe that the movie is without its easter-eggs and shout-out’s to the originals . . . the ’73 Oldsmobile Delta 88, the loss of a hand, a chainsaw, etc., all show up in the ’13 version, only in a different light, or way.  And it totally fucking works!  The performances are believable, the blood and gore are not CGI’d, and the story makes more sense than the original.  For example, in the original, five friends show up at a cabin and all hell breaks loose – we’re never given any insight as to why they are there in the first place, but I guess in the ‘80s, that little plot detail didn’t matter.  In our updated version, five friends attend the cabin in hopes of breaking Mia’s drug habits.  A feat none of them are perceive as “easy”.  After Mia gets possessed by the trees – it’s important to point out in this day and age that the trees don’t really rape the character, in contrast to the detail of the original, but there is an entrance point for the evil and it is between the character’s legs, fortunately it happens quick – she starts exhibiting drug-abused behavior, which make our other four protagonists not feel much panic when weird shit starts happening.  A well-used set-up point new to no one, I know, but used effectively to move the story along at a believable speed.  Afterwards, all hell breaks loose.  YAY!  I hate to spoil everything about the movie, so I’ll stop here.

As of today, Evil Dead stands at #1 among my favorite 2013 horror flicks.  That may change tonight (I hope it does – my hopes for The Conjuring are simply unexplainable) or in September with Insidious: Chapter 2, but if not, 2013 will not remain a total waste in terms of the genre.  By far my favorite of the four films, I suggest this as a staple to any genre fan out there as I’m sure it will remain in high contention with pop culture horror fanatics, like myself, as it ages.  Did you have a chance to revel in this madness when it was in theaters?  If so, what's your favorite out of the four and why?  Have a great week, all, and be sure to check out The Conjuring this weekend – don’t let Grown Ups 2 win. 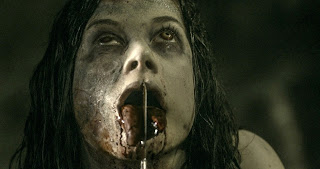