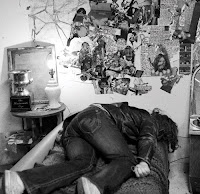 The Escape Hatch had a helluva weekend people. Well technically it started Thursday night at  Sun-Ray Cinemas where Robert, Nick and a hatcher caught the classic, "The Evil Dead". From there, on Friday night, the whole crew took in some pizza and suds, before we subjected our senses to the 2013 version of "Evil Dead". It was a blood bath, but I'll let Robert tell you more about that later. Saturday morning rolled in for Robert and T as they successfully made it to the finish line at the early spring version of the 5K run called Color Me Rad. From there, Nick, the said hatcher and I met up with the colorful runners to enjoy some before noon drinking with mimosas and rum and coke.

However the day was just getting started, because there was beer to be tasted, sampled and toasted at this year's edition of Jacksonville's Beerweek. Right on the St. Johns River, the weather was beautiful and the taps were flowing. We enjoyed some of the city's finest Food Trucks and after a couple more rounds of barley and hops we eventually wandered our way over to Hooters for more drinking and a late afternoon snack. The evening was topped off with the 3D IMAX version of the dinosaur classic "Jurassic Park". It was a great weekend of food, drinking, friends and fun, but to make a long story long there was new music involved.

While we were toasting to the day on Saturday, we were chatting about the bands we want to catch at our upcoming trip to the Shaky Knees Festival in Atlanta. Nick mentioned a band called J Roddy Walston and the Business and then pulled out his phone and proceeded to play three or four nasty, southern rock party jams from the band and I was sold. Besides the headliner Band of Horses, I wasn't too worried about Shaky's Saturday line up, but now J Roddy has moved to the ranks of the must sees. They are loud, fun, bluesy and rockin' enough to keep me entertained and interested. I'm looking forward to see if the live performance matches the energy of the studio songs. Today's MVM installment is called "Don't Break the Needle". It comes from the 2010 self-titled album, "J Roddy Walston and the Business". The countdown is on people. We are inside a month before we descend on Hotlanta. Stick with us and we'll share the fun with you. I hope you enjoy your Monday and remember to always live your soundtrack out loud.

Email ThisBlogThis!Share to TwitterShare to FacebookShare to Pinterest
Labels: by Pat, J Roddy Walston and the Business, Music Video Monday