A Shit Ton of Awesome Trailers

We got an awesome amount of new trailers over the past week or so, guys. Star Trek Into Darkness, The Lone Ranger, Man of Steel, and OHMYGODPACIFICRIM!!!! Forget all those other trailers, just watch this one! It’s got everything - Idris Elba, ninja shit, giant monsters, giant robots, ROCKET PUNCH!

What do you think of the trailer for Pacific Rim?

So Niki over at JoBlo.com recently highlighted this awesome bar in Hobbiton, New Zealand. Yes, you can drink some brew in a magical Hobbit village and don’t you dare pretend you wouldn’t want to.

Who’s buying the first round?

You may have noticed our spiffy new logo above, courtesy of Mr. Bill Wiist. Gandalf himself dropped by to mark the occasion. Special thanks to CT from Nerd Lunch for referring us to Bill.

@TarsTarkasnet, engaged in some #RightQuoteWrongFilm.

"You're a wizard, Harry." - Harry and the Hendersons #rightquotewrongfilm
— HoHoHoTarsTarkas.NET (@TarsTarkasnet) December 5, 2012

Pete from I Love That Film, summing up how I initially felt about the Man of Steel trailer.

Dan does nothing to assuage my fears about 48 FPS.

Thanks for reading! And now, it's question time again...

Click the pic and have a Happy Hobbit Weekend! 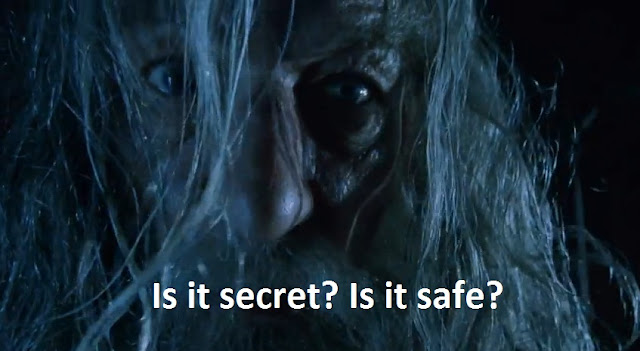