Batch o’ Hatch: To Kill a Mockingbird, Star Trek Into Darkness, and V/H/S 2

To Kill a Mockingbird

Fathom Events screened To Kill a Mockingbird a few weeks back and, heeding some advice from @20SomeAwesome and @jess_fts, I made a special trip to check it out. I’d never seen it before and catching it on the big screen seemed like a great way to rectify that. I wasn’t disappointed.


It wasn’t quite what I expected - I thought it would be more straight-up courtroom drama and it had a lot more Scout and Jem than I was expecting (I haven’t read the book) - but the performances and the film as a whole were great.

Anyone love To Kill a Mockingbird? Did anyone else catch the 50th Anniversary Re-release?

Thanks to C.H.U.D., I learned the official synopsis of Star Trek Into Darkness, the highly anticipated (by me, at least) follow-up to 2009’s Star Trek.

When the crew of the Enterprise is called back home, they find an unstoppable force of terror from within their own organization has detonated the fleet and everything it stands for, leaving our world in a state of crisis.

With a personal score to settle, Captain Kirk leads a manhunt to a war-zone world to capture a one man weapon of mass destruction.

As our heroes are propelled into an epic chess game of life and death, love will be challenged, friendships will be torn apart, and sacrifices must be made for the only family Kirk has left: his crew.


I’m a little worried that it took four years to get a follow-up to Star Trek. I think two years between films is a nice gap, and with Zachary Quinto recently alluding to the fact that he might not be up for more adventures as Spock after this upcoming film (I guess he’s counting on playing different characters in American Horror Story for the foreseeable future), another four years might be too long of a wait.

Do you like the sound of Star Trek Into Darkness? Do you hope Quinto sticks around for more films?

Wait, V/H/S is getting a sequel already?

Both Film School Rejects and Total Film have reported that filmmakers including Gareth Evans, Jason Eisener, and found footage Grand Poobah Eduardo Sanchez have signed on for S-VHS (The hell? Will each sequel’s title advance to a higher medium? We’ll be on Blu Ray in a few years at this rate). Thankfully, no mention of Ti West’s involvement.

Anyone excited for S-VHS?

There was a ton of hullabaloo about this Twinkie business on Twitter, including a tweet from Lucy/@bmovielass. Nice seeing Zombieland references worked in.

I caught The Relic for the first time recently. I surveyed the Twittercosm about the film and got some good responses. My take? It was a decent monster movie.

@zerbert under-rated monster flick, some scenes shot a little dark but worth a peek 4 sure..
— Socrates Johnson.... (@nowshowinghigh) November 18, 2012

@zerbert If that's the one with Tom Sizemore, then yep. Not in years, though. It was fun at the time.
— George Bell (@CallMeSirPhobos) November 18, 2012

This tweet from Ruth at "....let's be splendid about this..." doesn’t really need any further context.

Thanks for reading! And now, it's question time: 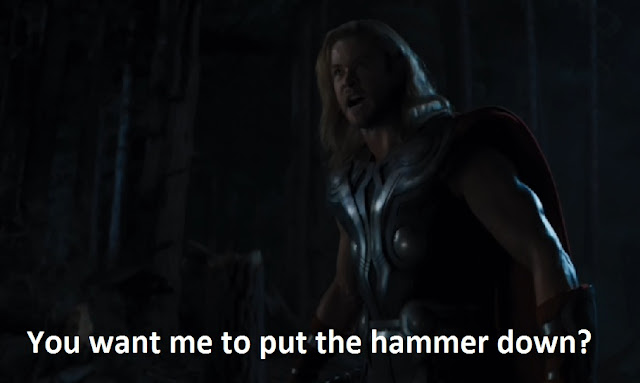