Escape by Moving to China: Looper

There’s a lot packed into Looper. To take it all in, you almost need more...time. *tomato flies by head*

In the film, Joseph Gordon-Levitt is Joe, a criminal in 2044 Kansas that assassinates targets sent back in time by the mob of 2074. The criminals of the future must send their targets back because it’s virtually impossible to dispose of a body in the future. 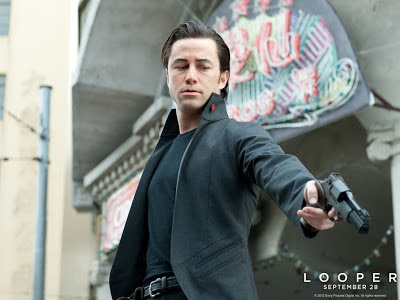 So the Looper program is so secretive that, when the mob wants to terminate a Looper’s contract, they actually send them back to 2044 for assassination by their younger self. This is known as “closing your loop”. The film really gains steam when Joe’s friend and fellow looper Seth (Paul Dano) allows his future self to escape upon being sent back for assassination. This is known as “letting your loop run”.

Before Seth is abducted by the mob (you can’t just let your loop run, people), he informs Joe that his future self told him that there’s a new boss in the future, closing loops left and right. He’s known as The Rainmaker. It isn’t long before Old Joe is sent back from 2074 for assassination. But wouldn’t you know it - he escapes.

The rest of the movie is a tangled web of Old Joe trying to kill the 2044 version of The Rainmaker (there are larger reasons as to why Old Joe travels to the past but I’ll let you see that for yourself) and Young Joe trying to kill and/or stop Old Joe. Before that unfolds, however, we see an alternate reality where Young Joe successfully kills Old Joe when he was sent back for assassination. The life that we see play out for Joe shows us his motivation for trying to kill The Rainmaker and change the past.

Director Rian Johnson and Joseph Gordon-Levitt again make for a great team and both of them are at the top of their game when it comes to telling Looper’s story. You know that there’s more to Young Joe when he slams on his brakes to avoid hitting a vagrant child. You can practically taste the backstory.

I only have a few complaints with the story (excluding my qualms with the time travel logic - I won’t go into all that for the sake of my sanity and yours). The third act of the movie kinda drags. A lot of it is due to time invested in Sara (Emily Blunt) a farmer whose son may or may not be The Rainmaker. We really can’t do without any of this part of the story, but I almost felt like Sara's tale was another movie in and of itself.

I almost wanted a little closure between the young and old versions of Joe. It’s not that I had a problem with their adversarial relationship, it’s just that they never come to understand each other. The last complaint I’ll lodge is that, if time travel in the future is controlled by the mob, wouldn’t there be some sort of government anti-time travel agency?

As a technical piece of work, this film is the tits. The design is fantastic and the makeup and prosthetics used to turn Gordon-Levitt into a young Bruce Willis are very well done. Expect an Oscar nod for this film in the makeup department. One visual that I enjoyed was the repeated image of a cloudy, swirling cup of coffee - a perfect metaphor for the murky effects of time traveling throughout the film.


I really enjoyed Looper and the fact that the film has no shortage of great actors is a big reason why. Joseph Gordon-Levitt and Bruce Willis are technically bad guys here, but good luck disliking either of them. Emily Blunt is fantastic. I really don’t need to say any more than that, but I will add that her relationship with her son (played by Pierce Gagnon, a truly adorable and gifted little actor) in the film is a huge part of the emotional core of the film and one scene near the movie's climax had me choking up a bit.

I feel like Looper isn’t so much about time travel as it is the effects and consequences of it. One of the best (and most disturbing) parts of the film involves the aforementioned Old Seth. What does the mob do if you escape upon being sent back for assassination? Let’s just say it involves disappearing body parts. This is the dark side of time travel. There is a reason, it would seem, that it is illegal.

The greatest element of the film is the two versions of Joe. Old Joe and Young Joe both order steak and eggs in a diner scene. At the beginning of the film, Young Joe is learning French. We see the payoff when Old Joe travels back from 2074.

I mentioned that Blunt and her character's son are a huge component of the heart of the film, and Young Joe's character arc makes up the rest. In the diner scene, Old Joe accuses Young Joe of being selfish. You might be surprised to find out how wrong Old Joe turns out to be.