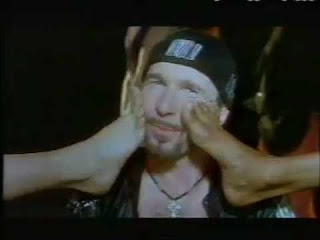 So the t.t.e.h.! crew and some friends took in the city of Atlanta this past weekend for some thrill rides at Six Flags, it was a huge let down, and to see the band Delta Spirit perform at The Masquerade, not a let down. Of course I could ramble on forever about the concert, but I won’t because this is Music Video Monday and not a post about how awesome Delta Spirit is and how if you haven’t started listening to them yet, then you’ve really disappointed me and because of that colossal disappointment, I don’t know if we can still be friends. Ok, I take that back. You don’t disappoint me, you just somewhat let me down a whole lot, but I won’t hold that against you for now.

Anyways during our travels in and around Atlanta, we heard a U2 song twice, I think it was “With or Without You”. Each time it started a conversation about the band. The first was about whether or not we like the Irish super power and then somehow turned into a discussion about the South Park, “More Crap”, episode where Bono has (or is) the record for the biggest crap and sucks on a “bitty”. I’ve never seen it personally, but others in the group have and say it’s hilarious. The second turned into today’s Music Video Monday.

I’ve always loved this song. It’s probably not even in their top 25 most popular and Bono doesn’t even sing lead, but for some reason I dig it. From the 1993 direction changer Zooropa, the song revealed a different side and style that U2 had never showed before and maybe that’s what the appeal is. A couple interesting tid bits I learned while searching for the video are that it first got life during the recording of the album Achtung Baby, but was scratched for not fitting in and also that it was released as a video single, a very uncommon format for the time. http://en.wikipedia.org/wiki/Numb_(U2_song). Well without further delay I give you U2 and “Numb”.