Now Hear This!: Delta Spirit- The Sound They've Been Looking For 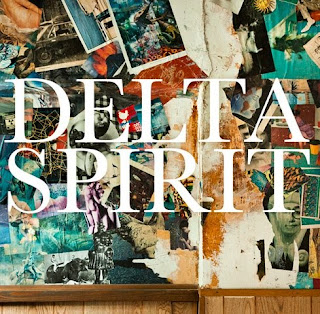 If one doesn’t evolve, there’s a tendency for one to grow stagnant. Just as in life, I believe it can happen to bands as well. Change can be a good thing, not change for the sake of change, but the kind of change that produces self growth and discovery. The San Diego/Long Beach rockers, Delta Spirit, have done just that and don’t shy away from admitting it. They’ve openly talked about finally finding their real sound and have come out swinging on their self-titled effort released March 13th. “We found the sound that we've been looking for, that we've been growing into, and as soon as we hit on it, we ran with it,” (Matt) Vasquez says. “That’s why it’s a self-titled record, so we could connect our identity with the album, because this album is what we think Delta Spirit is.” http://deltaspirit.net/bio

It’s quite a progressive change from their rough and rootsy 2006 EP release I Think I’ve Found It. For the most part, gone are the piano, harmonica and acoustic guitars that were so prevalent on Ode to Sunshine and History From Below. Although the piano is still there on the ballad “Time Bomb”, (Kelly) Winrich can be found behind a synthesizer/keyboard on most tracks. Another noticeable transformation is the depth of the guitar arrangements. They’ve always been loud, especially live, but the driving rhythms of (Will)McLaren, Vasquez and (Jon)Jameson power themselves into your ears and before you know it, you’re playing air guitar in the middle of traffic on the songs, “California” and “Money Saves”. However, the most controversial use of an instrument is the drum machine that shows up throughout. Purists don't worry though, (Brandon) Young still kills it on "Idaho", "Empty House", "Otherside" and "Money Saves".

After the success of History From Below and particularly the track “Bushwick Blues”, it would’ve been easy for them to head full speed into pop music land. You know give the public what they want, but from what the band members have said, it seems like they’ve produced an album for themselves. That’s a refreshing attitude, but an attitude that might indirectly get them a wider fan base than even they bargained for. And by the way, it doesn’t make you a sell out because you acquire a bigger following. You’re a sellout if you move from Tennessee to New York and make a shitty album for soccer moms. I digress.

To those that say, “They’ve totally lost their roots”, I say take a listen to the tracks, “Empty House”, “Home” “Otherside” and “Into the Darkness”, all very easily could’ve wound up on Ode to Sunshine or History From Below. Even the closer, “Yamaha”, although heavily drowned in synthesizer/organ, conjures up “Ransom Man” minus the acoustic guitar. I promise you the folk, alt/country vibe you fell in love with is still there people. You just have to listen a little harder.

"We're so happy to play our old songs; why would we stop playing them?" says Vasquez. Adds Jameson, "Why would we keep writing the same ones that have been written? It's like when you're married. Are you going to be doing missionary every time?" He pauses and laughs. "No. This is our backwards cowgirl."
http://www.rollingstone.com/music/news/delta-spirit-hit-sxsw-at-breakneck-pace-20120316

Call it a change of direction or just following the indie-rock trend, either way their third effort works. It merges old with new, without sounding contrived and hard core fans don’t’ let the change in sound put you off, because if you do you’ll be missing out. I’ve made the comment that, “2012 is the year of Dr. Dog and Delta Spirit”, on this blog, to friends and basically anyone who will listen. I invite you to climb aboard the train, there’s an open hatch and plenty of room. Wanna experience Delta Spirit live? They’ll be in Atlanta April 7th and so will we.

I’ve included two teasers below. Check them out and if you like what you hear, I suggest you give a good listen to “California”, “Tear It Up”, “Otherside”, “Empty House” and “Money Saves”. Enjoy and Happy Listening!