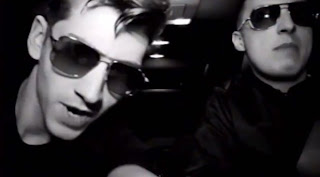 I saw the tweets and “I jizzed in my pants.” It was the best Monday ever! Early yesterday morning, unexpectedly, I saw that the Arctic Monkeys released a new single. I hadn’t heard a word about it, not that I would be privy, but they usually give a heads up. The song “R U Mine?” is much harder than most of the stuff on Suck It and See, which is not out of the ordinary for the Arctic Monkeys’ B-sides and single releases. I knew they had it in them. I just wish there were more songs like it on Suck It. The accompanying video is way cool, watch below, and see for yourself.

The other bit of music news, that had me screaming like a preteen girl at a Justin Beiber concert, was the info that Delta Spirit was streaming their soon to be released, self titled album on Rolling Stone's website. The 11 track LP, release date March 13, is a slight departure from their first two efforts and a long way from their EP. Every early review I've read (basically copy and pasted from Rolling Stone, says “sounds like My Morning Jacket, Radiohead and Wilco.” I'd be cautious to label this album as sounds like, because Matt Vasquez’ voice is way different from those three frontmen. However, I will agree that it’s less folksy, more experimental and much cleaner than their previous releases. After the first and second listens, my favorites are the lead single, “California”, “Money Saves”, “Empty House”, “Into the Darkness”, “Time Bomb” and “Tear It Up”. Four tracks, “Idaho”, “Home”, “Otherside” and “Yamaha” need further attention. One track, “Tellin’ the Mind",, rocks minus the obnoxious background native scream. With the scream, I can't wait for it to be over.

Here is the link to Rolling Stone
http://www.rollingstone.com/music/news/exclusive-album-stream-delta-spirit-expand-their-sound-on-third-album-20120227
Posted by Patrick at 6:22 PM