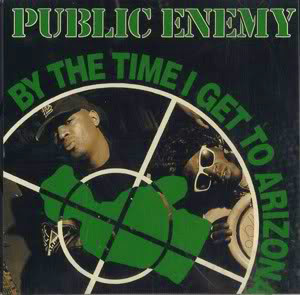 In recognition of Martin Luther King Day, today’s Music Video Monday is brought to you with a little history lesson. It’s 1986 and the outgoing Arizona Governor has created the state’s MLK Holiday. However, in January 1987 the newly elected Governor, Evan Mecham, keeps a campaign promise to end the recognition of the day as a paid holiday for state employees. A decision that was first supported by Arizona Senator John McCain, but later reversed after all of the negatives started to roll in and he realized that his reelection was more important. I’ll stop there because this is about the music and not politics.

The decision led to protests, cancellations, boycotts, the state's loss of the 1993 Super Bowl and the 1991 song, “By The Time I Get to Arizona”. The song, written by the rap group Public Enemy, had a video as controversial as the band itself. It depicted the killing of a cop and the assassination of Arizona officials, including Mecham. MTV refused to show the video because of it’s violence. My how times have changed, now the same network has no problem showing drunk ass, fist pumping, self proclaimed guidos beating the shit out of people, but I digress. Yes, I know that depicted killing is much worse than street and bar fighting, but both are equally impressionable.

Eventually, like the other 49 states, Arizona would recognize the holiday and for that act of “fighting the powers that be”, I want to thank Public Enemy. I will do my best to enjoy my Monday off by listening to music and I just might put my black leather fisted glove up in the air while I listen to some of yours. Happy Monday and Enjoy!