This past Wednesday, Robert and I took a drive down to St. Augustine Beach for a mid-week concert at Café 11. It was Robert’s first time and my second at the quaint little venue located along A1A that has hosted such bands as Dr. Dog, Delta Spirit, Vampire Weekend, Dawes and The Cave Singers. The café by day turns into an intimate music venue at night for the bands that are fortunate enough to roll into the ancient city. I really love the vibe of the place and hope to catch some of their upcoming shows such as; Deer Tick, Mister Heavenly and Josh Ritter.

So back to Wednesday night, we show up around 7:45 expecting to have a short 15 or so minute wait for the opening act the Sunbears! We get our tickets at will call and as usual I buy a concert t-shirt. We go inside and to my surprise they had Bold City’s Killer Whale Cream Ale on tap. I was a happy guy for awhile until it reached almost 9:00 and I was on my third beer with no Sunbears! on stage. This has only happened one other time. It was Death Cab for Cutie at the Hard Rock Orlando. Tiffany and I waited for over an hour before they came on, granted they put on a great show, but we were not happy and I was starting to get that same feeling when these two bearded fellows strolled to the stage.

The, Sunbears!, a local two man band (Jonathan Berlin & Jared Bowser) from Jacksonville welcomed everyone and introduced themselves before ripping into their opener “I’m Alive!”. This song, which I found on Fuse or maybe some free compilation album, was partly why I made the trip. I was curious to hear them live because for a two man band their songs have a lot going on and I have to say I was not disappointed. Jonathan’s voice was spot on and Jared’s drum play, which I always listen to at concerts, was out front and in your face. At one point, my shirt was vibrating. They played for about 30 minutes, cranking out seven songs, new and old, including one track from their 2009 album, Dream Happy Dreams, called “A Lovely Tuesday in June”. I had never heard it before, but it is now on my iPod. Although the hour wait was irritating, it was well worth it because with their atmospheric trippy sound, visual backgrounds and overall positive vibe, it’s hard not to lose yourself in their world. If you’re a fan of MGMT, Black Kids or Did it Offend You, Yeah?, you’ll wanna check these guys out. Plus they’re from J-Ville, so give them some love. Their new album is set to be released November 22.

We got a bit of fresh air, topped off our glasses and pushed through the second opening act. Not gonna mention their name, because my mom told me if you don’t have anything nice to say, don’t say it. I guess there is a fan base out there for these guys, but I was not impressed. To me, I’ve heard their punk, garage sound many times over and by 10:45, I was more than ready for Tapes ‘n Tapes. 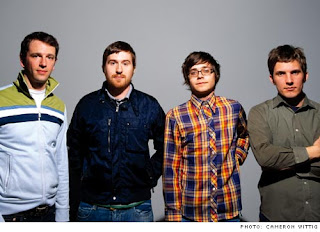 Finally around 11:00, the quartet from Minnesota took the stage. I was extremely excited to hear them, even though I’m a little ashamed to admit that I didn’t listen to more of their stuff before the show. With three studio albums and an EP under their belt, there should be way more songs in my music catalog from them. That being said, I was all ears for the songs, “Cowbell, “Conquest”, “Badaboom” “Insistor” and “Freak Out”. They knocked each of them out with the fervor and gusto I expected, as well as a good mix from all of their albums, with songs like, “Hang Them All”, “On and On”, “One in the World”, “The Iliad”, “Just Drums” and “The Saddest of All Keys”. Overall, they treated the energetic crowd to a 15 song set, coming in just under one hour. Their energy was amazing, the performance didn’t stray too far from the studio versions and I’m a bigger fan now that I’ve seen them live. If you’re a fan of The Walkmen, Franz Ferdinand or Modest Mouse, I strongly recommend you to take a listen.

*** On a side note, Robert did get verbally assaulted, but maybe he’ll let you know about that some time down the road.
Posted by Patrick at 12:29 PM