Another Trip to Orlando, Another Incredible Arctic Monkeys Show 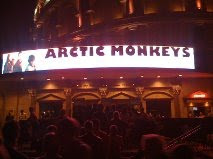 I had a hard time writing this because I didn’t want to come across sounding like a giggly school girl. The Arctic Monkeys are my favorite band and anything I would write about them at this point would seem slanted. So instead of writing about the show (it was amazing) I decided to write about some of my observations of the night.

Observation I: The Beer
Well it started out with an $8.00 stale, skunky beer. The friend I was with said, “it smelled like feet.” I thought it smelled more like wine, which to me smells a lot like feet. He said, “That’s because the keg had probably been fermenting in the basement for years before they realized it was still down there.” He actually returned his, but after the first sip or two, it was fine and I even ordered a second. It still had the same skunky smell like the first, but you can’t say I’m not a trooper.

Observation II: The Crowd
It was much livelier than the first time I saw them at the same venue last April. It was larger, again not a sellout, but a solid crowd, especially the floor. This time around a crowd surfer got snatched up, only five songs in, by two beefy security guards. I don’t know if that guy made it back in, but his head got real intimate with a forearm of one of the security guards. Also on the floor, two different mosh pits broke out even though signs were clearly posted forbidding them, but who can blame those crazy m-f’ers when they play “Teddy Picker”? And one last thing, a balcony crowd that actually stood up during the show. My first go around seeing AM at the Hard Rock, I sat in a section that seemed afraid to stand up. The entire time I thought, "come on people, it’s a frickin’ rock concert, get off your asses!" So it was nice to be around people that stood during most of the show and all the way through the three encore songs.

Observation III: The Band
Besides songs from the new album, the performance wasn’t much different from the first time I saw them, but I did take away two things from the night. First, Matt Helders plays the drums like a frickin’ animal. He tore it up on the songs, “Brianstorm”, “I Bet You Look Good on the Dance Floor”, “A View From the Afternoon”, “This House is a Circus”, “Teddy Picker” and “Crying Lightning”. In my opinion, he’s one of the best young drummers from any music genre. Second, Alex Turner has really embraced the lead singer role without acting like a pompous ass. Prior to this show, each time I have seen him perform live, he seemed a little uncomfortable and at times a bit pissy (see short clip below). It’s a transition that needed to be made. I suppose there are two possible reasons for this; One, his solo effort put him out there all by himself. Two, I guess that’s what happens when you grow up and gain confidence in what you are doing.

Observation IV: The Songs I Didn’t Get to Hear
Although they played all of my favorites, I really wished they would’ve played some of these; "Fright Lined Dining Room", “Library Pictures”, “All My Own Stunts”, “Cornerstone”, “Balaclava”, “Fake Tales of San Francisco” and “My Propeller”. I know I’m being greedy, but how about a 26 song set next time?

Setlist:
Pretty Visitors
Don’t Sit Down ‘Cause I’ve Moved Your Chair
She’s Thunderstorms
Fluorescent Adolescence
Hellcat Spangled Shalalala
Brianstorm
View From the Afternoon
I Bet You Look Good on the Dance Floor
This House is a Circus
Still Take You Home
Evil Twin
Brick by Brick
Love is a Laserquest
Do Me a Favour
Suck it and See
When the Sun Goes Down
Encore:
Teddy Picker
Crying Lighting
504