We're kicking off the Halloween season tonight with a few flicks worthy of starting the month of October off with a bang and a chill. Check out our picks below.

Quick – think of a horror film with a better pedigree than Creepshow, a 1982 movie directed by zombie maestro George Romero and written by none other than Stephen King. Did you think of one? Oh, you did? Well don't even tell me, I don't care. Sorry about that. 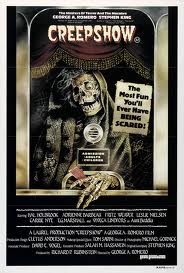 A question we posed for this October kickoff fest was something along the lines of "Why is your film perfect for kicking off the Halloween season?" I picked Creepshow because there's just something about the film that feels like Halloween to me. The writer/director team of King and Romero is obviously a factor, but I think the fact that the film is actually an anthology of five creepy tales is what does it. Some of the best horror comes from that setup - think of The Twilight Zone or the more recent Trick 'r Treat (a film I almost picked before settling on Creepshow).

The film features Leslie Nielsen, Ted Danson, Hal Holbrook, and other great actors, and they really bring the stories to life. Creepshow isn’t up there with The Shining or The Exorcist or anything, and some people might not even consider it a classic, but it’s well-made, creepy, and has its fair share of great moments.

My favorite tale from the film is probably "The Crate", a segment about a mysterious box shipped to a university that contains a horrific creature. The crate is obviously bad news for anyone that opens it.

I'm stoked to watch this film again, and I hope everyone agrees that it'll help kick the season off in style.


Nick’s Picks: The Mist and YellowBrickRoad

Our Halloween season kickoff is gonna start with a scream.  Robert picked a cool flick that I haven’t seen in years and I look forward to watching it with our company, neither of whom has had the fright delight of King and Romero combined in one film.  I’m anxiously awaiting the reactions we get out of them while they watch King play the lead role in his story.  It will undeniably be something not to miss.

Now you may be asking yourself why I’ve chosen two titles to Robert’s one.  Well, it was a Wednesday afternoon and we were eating lunch, talking about the kickoff when I said, “I’m gonna bring two.”  He swallowed his mouthful of sub and said, “Cool.” 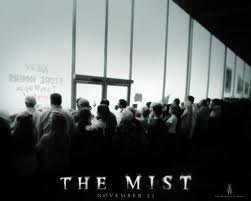 The first of my two is Frank Darabont’s adaption of the Stephen King novella, The Mist.  Now some of you might think we have a couple of hard-ons for King, but I’m here to assure to Shut Up!  I’m choosing The Mist for a couple of reasons, one; I have the Blu-ray edition that includes a black and white version and I haven’t watched it yet.  I love this movie in color and I’m expecting it to be even better in black and white. Two; this flick is downright creepy all the way around.  The terrors in this movie come from all directions starting with the unseeable.  The people trapped in the store can’t see anything further than the window panes.  Throw in a various array of demon-like wildlife (including arachnids that would make Spider-Man piss his tights), very few weapons, no contact with the outside world, a psychotic Jesus freak, and an ending that’ll make your heart sink and you’ve got yourself one hell of a classic horror movie. 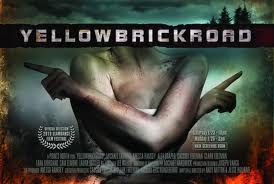 YellowBrickRoad isn’t a popular choice by any means, but its fuckin’ weird, man.  I wanted to see this in a theater but the only showing was at midnight on a Thursday and I’m getting too old for that kind of shit.  It’s an indie film more or less, pretty low key, but the trailer on IMDb looked like something I could enjoy.  So when I happened by it one day while browsing I decided to buy it, but when I watched it, I fell asleep under inebriated circumstances. I had to watch the second half the next morning.  I didn’t feel any closure once it ended and because of that I still feel a little empty and I need my trusty confidant’s take on it.  So it stands as my Number 2 and I'll add that, aside from it being weird, it’s haunted, and I think a haunting is a good way to kick off the season.
Posted by Robert at 10:12 AM