Some opening tracks of an album move you a little; others not at all and then there are those that rank as downright shitty. No worries here, nothing like that from my list. My Top Album Openers have changed lives (well at least mine), conceived babies (not mine), ignited music revolutions and made music history. So sit back and enjoy, give me some props or even tell me I’m bat shit crazy, whatever. 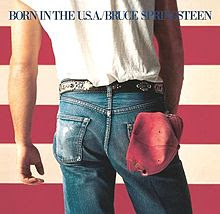 How could I not have this tale of hard times and despair in the greatest country in the world? A song that was hi-jacked by Reagan during the ’84 election, not knowing that it wasn’t as patriotic as Ronnie thought. The most telling line, “I'm ten years burning down the road. Nowhere to run ain't got nowhere to go. Born in the U.S.A.” Besides the title track, this album gave us the singles; “Dancing in the Dark” (Courtney Cox video), “Cover Me”, “I’m On Fire”, “Glory Days”, “I’m Goin’ Down” (Check out Vampire Weekend Cover) and “My Hometown.” It didn’t end there, because it also had one of my Springsteen favorites “Darlington County.” 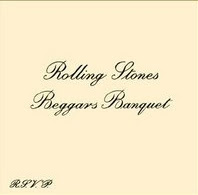 The Rolling Stones - Sympathy for the Devil
(Beggars Banquet, 1968)

The opener from the very bluesy Stones' album that some say is a “must listen before you die." Not sure if I’d take it that far, but I do agree that this song is worth the listen. "Sympathy" is not only a cool song; it also gives you a history lesson about some of the bad deeds the “red right hand” has been involved in over the years. “I stuck around St. Petersburg. When I saw it was a time for a change. Killed the Czar and his ministers.” “I rode a tank. Held a General's rank. When the Blitzkrieg raged. And the bodies stank” “I shouted out "Who killed the Kennedys?" Well after all. It was you and me.” 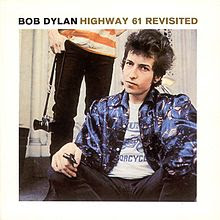 I’m not going to dive into all the reasons why Dylan is a rock icon because honestly I only have a superficial knowledge of what he did. You know the staples like “Blowin’ in the Wind”, “The Times They are a Changing”, “Rainy Day Woman”, “Lay Lady Lay”, “Knockin’ on Heaven’s Door” and “All Along the Watchtower.” I know there is more, but for some reason I have never taken the time to find out. 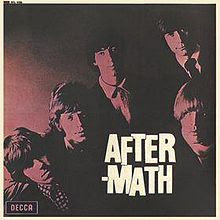 It didn’t crack my Top 10, but “Paint It Black” ranks as one of my favorite Stones’ songs. I love the desperation in Jagger’s voice when he tells us, “I see a red door and I want it painted black. No colors anymore I want them to turn black. I see the girls walk by dressed in their summer clothes. I have to turn my head until my darkness goes.” This album also produced the single, “Mother’s Little Helper” and “Under My Thumb”, the song that was being performed at the time of the Altamont concert death. 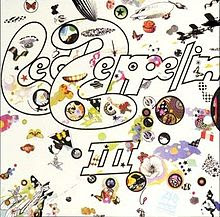 “A-ah-ahh-ah, ah-ah-ahh-ah” Come on! You seriously thought this couldn’t be near the Top 10. It’s hard to keep off a song that claims, “The hammer of the gods will drive our ships to new lands. To fight the horde and sing and cry, Valhalla, I am coming.” Don’t quote me on this, but I swear this is Thor’s “pump me up before going into battle song.” Plus, thanks to this song, Jack Black made being a band teacher cool.

So here you go, the songs you’ve been waiting for. Drum Roll Please…… 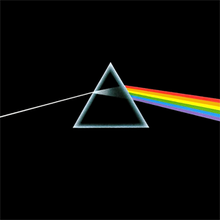 This 1973 masterpiece was recorded at the famous Abbey Road Studios in London. The opener is an instrumental, but you know what, I don’t give a shit because, “I’ve been mad for fucking years, absolutely years.” It comes from one of the best selling albums of all times, an album that was on a Billboard album chart for over 1,500 weeks. And yes someday I gotta watch The Wizard of Oz, while this album plays, to see if they really do go together. 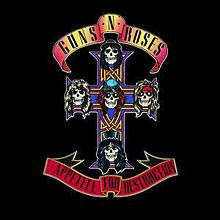 I wasn’t a huge fan when these California rockers hit it big 1988/89, but they helped make metal cool even for the “in” crowd. Amazingly, this was not the first, but second single released from Appetite for Destruction. Besides “Welcome”, it produced the singles; “It’s So Easy”, the swaying “Sweet Child O’ Mine”, “Nightrain” and “Paradise City.” A Big Shot out to, Tiffany’s friend and Axl admirer, Jessica. 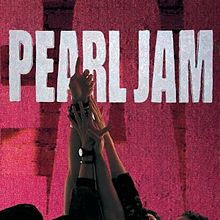 It’s hard for me to have this album so far down, but I based it on song not album. Ten not only changed my music life, it forever changed my life as well. When all of my friends were shit deep in country, I was rocking out to “Even Flow”, “Alive”, “Jeremy”, “Oceans” and “Black.” Now that I think about it, those same friends are still shit deep in country. I guess the more things change, the more they stay the same. I saw PJ for the first time three years ago and they lived up to my 17 years of respect and admiration. 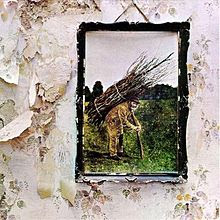 “Hey, hey, mama, said the way you move.” It only reached #15 on the charts, but it has one of the most recognizable Led Zeppelin guitar riffs. It was one of two released singles, the other being “Rock and Roll.” This surprised me considering the album produced; “Stairway to Heaven”, “The Battle of Evermore”, “Four Sticks”, “Misty Mountain Hop”, “Going to California” and “When the Levee Breaks.” BTW that’s the entire album. 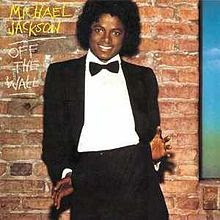 This was the King of Pop’s fifth studio album. Sure he was creepy by the end, but if you were cool you had this release. “You know I was, I was wondering, if, I should keep on, because, the force, it’s got a lot power and it make me feel like ah, it make me feel like…. Woooo!” Tell me you don’t start dancing when you hear the trumpets come in. If you say you don’t, I call you a dirty liar! O.T.W. gave us the hits; “Rock with You”, “Girlfriend”, Workin’ Day and Night, the title track and She’s Out of My Life. It was the first solo album to produce four Top #10 singles. 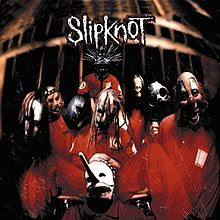 The nine headed monster, (now eight, R.I.P. Paul), from Des Moines ripped the doors off of nu metal and used them to beat the competition bloody. “You can’t kill me, cause I’m already inside you.” “(Sic)” technically isn’t listed as the opener, but it still makes my list because Track 1: "742617000027" is :36 seconds of, “The whole thing, I think, it’s sick.” taken from a Charles Manson documentary. Check it out here: http://www.youtube.com/watch?v=2M6GNXgNRYw&NR=1 The album produced the singles; “Wait and Bleed”, “Spit It Out” and “Surfacing.” Also, it let's us into the world of their three creepiest songs on the album; “Prosthetics”, “Scissors” and the controversial “Purity.” 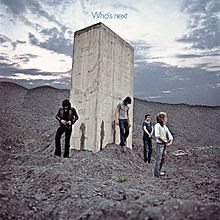 “It’s only teenage wasteland.” The band, famous for a “the deaf, dumb and blind boy”, smashed guitars and a “Moon the Loon” drummer, would crank out such hits as; “Bargain”, “Behind Blue Eyes” and “Won’t Be Fooled Again.” Only “Bargain” was not released as a single. The Who, considered to be one of the greatest rock bands of all times, has to make a list like this. 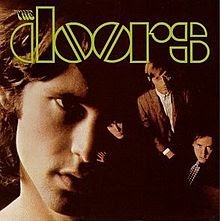 Long before the world, (at least the first couple rows at a Miami concert), would be exposed (allegedly) to the lizard king, The Doors would release their debut. “Try to run, try to hide” from an album that gave us: “Soul Kitchen”, “The Crystal Ship”, “Twentieth Century Fox”, “Alabama Song (Whisky Bar)”, “Light My Fire”, “Back Door Man” and the closer “The End.” Who can forget the scene from Apocalypse Now? I was surprised that only “Break on Through” and “Light My Fire” were released as singles. 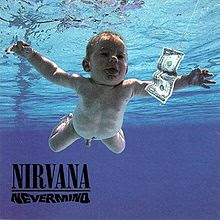 This probably would have been number #1 five years ago, but it’s still a close second. Like Pearl Jam’s album Ten, this song changed my music life and the rock music scene forever. It’s unfortunate that Kurt Cobain left us so young. I wish he could’ve overcome his demons. It would've been interesting to see if Cobain evolved musically like PJ and Eddie Vedder. Besides “Smells Like Teen Spirit”, Nevermind would go onto produce the singles: “In Bloom”, “Come As You Are” and “Lithium.” “Here we are entertain us.” I think this line sums up an entire generation. 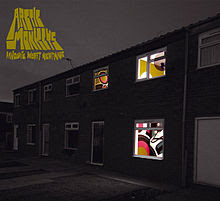 “And I wonder, are you puttin’ us under? Cause we can’t take our eyes off the t-shirt and ties combination. Well see you later innovator.” This song ranks #2 on my iTunes Top 25 Most Played, maybe someday I’ll let you know what #1 is. Yes, they are my favorite band and yes, they are newbies compared to all of the other bands on the list, but an album that has “Teddy Picker” as the #2 track must rank up there for the best one, two punch to start an album. Also features the single “Fluorescent Adolescent”, underrated tracks “Balaclava”, “Do Me a Favour”, “Old Yellow Bricks”, “Only One Who Knows”, “If You Were There Beware” and one of their best slow songs “505.”