I’ll be honest when it came to this list I had to step up my game so I could keep up with my Escape Hatch counterparts. Although I love to watch movies, out of the four of us, I’m probably the least “in the know” about coming attractions. However after watching hours of trailers, I give you my Top 10 Must See Movies (at least until September.) They’re in order by release date.

Horrible Bosses: July 8th - If you’ve had a job, then you’ve had a horrible boss. Horrible Bosses is a comedy about three friends who devise a plan to get rid of their asshole employers. You soon realize that they’re not professionals. Starring: Jason Bateman, Jason Sudeikis, Charlie Day, Jennifer Aniston, Colin Farrell, Kevin Spacey, Jamie Foxx and others.

The Ledge: July 8th - This movie portrays the true test between a believer vs. a non-believer. When you throw in some sex, suspense and betrayal, you have The Ledge. As we found out in Insidious and Hard Candy, Patrick Wilson plays a not so nice guy very well. Starring: Wilson, Liv Tyler, Terrence Howard and Charlie Hunnam 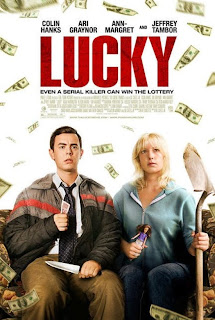 Lucky: July 15th - An unassuming serial killer (Hanks), wins the lottery. You know what those reality shows tell us about people who win the lottery. Oh to kill or to spend millions? How ‘bout both! Since Orange County, I’ve wanted to like Hanks, here’s hoping he comes through. Starring: Colin Hanks, Ari Graynor, Jeffrey Tambor

Good Neighbors: July 29th - How well do you really know your neighbors? In this suspenseful thriller, secrets make it hard to trust anyone. I love watching psychological mind fucks and the last time I saw Scott Speedman in one, he was tied to a chair. This time he’s in a wheelchair, however looks can be deceiving. Starring: Speedman, Emily Hampshire and Jay Baruchel

Rise of the Planet of the Apes: Aug 5th - Any time man is made to look vulnerable I’ll take a gander. Who has really evolved here? The original “monkey” movies were entertaining and I think this one will fall right in line. I had a friend say, “spoiler alert, I think we know that the apes win.” I’m ready to settle in and find out for sure. Starring: James Franco, Freida Pinto, John Lithgow, Brian Cox 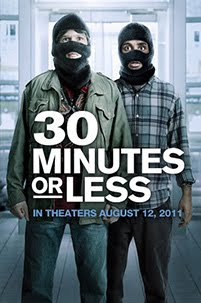 30 Minutes or Less: Aug 12th - The last time a pizza delivery boy brought so many laughs, Patrick Dempsey was delivering extra anchovies. With this cast and Zombieland ties, I think 30 Minutes or Less will bring more than a chuckle or two. Starring: Jesse Eisenberg, Danny McBride, Nick Swardson and Aziz Ansari

Our Idiot Brother: Aug 26th - We all have that one relative who marches to their own beat. We are slightly embarrassed by them, but love them for who they are. In Our Idiot Brother, Ned (Paul Rudd) is that relative. I didn’t see Rudd’s previous release How Do You Know? (by choice), but that won’t stop me from seeing this idiot. Starring: Rudd, Emily Mortimer, Elizabeth Banks, Zooey Deschanel, Steve Coogan 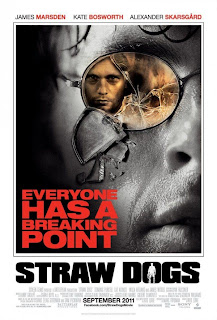 Straw Dogs: Sept 16th - All I have to say to my fellow Hatcher Tiffany is, “Alexander Skarsgard, shirtless” and truth be told I’d really only have to say his name and she’d be there. Now that I’ve gotten that out of the way, this is a remake of the 1971 Dustin Hoffman flick. I can relate to it because I grew up in a very rural southern town and I think I recognize some of the characters. Starring: Skarsgard, James Marsden, Kate Bosworth.

50/50: Sept 30th - Two Friends, played by Joseph Gordon-Levitt and Seth Rogen, try to fight a terrible disease (cancer) with humor. Ok, so I know what you’re thinking, “this sounds familiar”, I’ll stop you it’s not Funny People 2. Starring: Gordon-Levitt, Rogen, Anna Kendrick, Bryce Dallas Howard (No offense Richie, but how did she come from your loins?)

Tucker and Dale vs. Evil: Sept 30th - Boy toothless, inbred hillbillies and/or mountains have given us some terrifying movies, Deliverance, Texas Chainsaw Massacre, I Spit on Your Grave (watch the trailer for the 1979 original), Wrong Turn, House of 1000 Corpses and the follow-up The Devil’s Rejects. In Tucker and Dale vs. Evil, two hillbilly friends have to live down that murderous stereotype. The body count grows, but so do the laughs. Starring: Alan Tudyk, Tyler Labine, Katrina Bowen