I dare you to Suck It and See 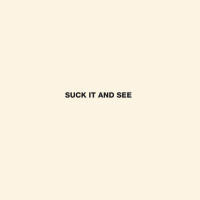 The boys from Sheffield (High Green) are set to soon release their fourth album, entitled Suck It and See. The title comes from a British expression that loosely means “try something unknown,” and if you’ve never listened to the Arctic Monkeys, I strongly recommend you do. I’ve heard six of the twelve tracks and, at first listen, I’ve noticed an equal mix of the albums Whatever People Say I Am, That’s What I’m Not, Favourite Worst Nightmare and Humbug. With internet leaks and amateur concert footage galore, it’s nearly impossible to be surprised by a new release anymore. However, in scouring the net for anything Arctic Monkeys, I was surprised by the large number of fans who posted comments about wanting the “old Arctic Monkeys” back, which led me to write this.

All great bands ebb and flow throughout their careers. The Beatles, The Stones and Pearl Jam to name a few, all changed in some way during their careers. Hell, Eddie Vedder recently released a ukulele album, and who can forget the psychedelic phase The Beatles went through? Arctic Monkeys fans have to realize that the band members were 20-21 years old when Whatever People Say… came out. Their lyrics and sound were bound to change. In an interview about the new album, lead vocalist and main writer Alex Turner was asked what can be expected from the new album and he replied, “we always try to move on.” I personally can appreciate that in an artist. If music/musicians didn’t change, I might still have a mullet (in full disclosure, I can’t actually grow one, but a guy can dream) and Guns N’ Roses would be on their 10th installment of Appetite for Destruction. Now, on to my preview.

Suck It and See sounds like it’s going to deliver something for everyone, maybe even a song or two for those fans longing for some Fake Tales. Here are some thoughts on the new tracks I’ve heard. Track 2 – Black Treacle, which I learned oddly enough is a dark syrup, is a slow-to-mid tempo song that reminds me a little bit of Secret Door, Fire and a Thud or even an EP track called Too Much to Ask. Track 3 – Brick by Brick, the first song I heard from the new album, has a Humbug, “stoner rock” feel to it, but is also reminiscent of English 60’s rock. Matt Helders, who provides drumming and vocals for the band, takes more of a lead on this track and it works. Unlike many of Alex Turner’s lyrics, Brick by Brick is simple but still manages to rock. Track 4 – The Hellcat Spangled Shalalala has a Joining the Dots or No Buses sound. To me it doesn’t really stand out, but it’s a solid song we’ve all come to expect from Arctic Monkeys. Track 5 – Don’t Sit Down ‘Cause I’ve Moved Your Chair is a laid back song about very basic things one should not do. The best part of this song is at about the 40-second mark, when Jamie Cook’s guitar comes whining in, followed by Matt’s heavy drums and Nick O’Malley’s slow bass line groove. Don’t Sit Down… was my favorite song until I saw them perform Track 6 – Library Pictures, on Later with Jools Holland. This song will stay on repeat for me for a long time. I won’t compare it to Brianstorm, my favorite Arctic Monkeys track of all time, but it certainly comes close. It has that fast punk sound of Nettles or Sketchead. 10, 9, 8, 7, 6, 5, 4….3, 2, 1….a countdown has never made me nod my head with so much approval. Take a listen and you’ll see.

Track 8 – Reckless Serenade is a slow track with a poppy 60’s sound that the Arctic Monkeys pull off so well. With songs like this, Alex Turner is at his best. In my opinion, Turner is amazing at helping listeners visualize his music. It felt very much like The Bakery or Bigger Boys and Stolen Sweethearts, two favorites of mine. Track 9 – Piledriver Waltz, first released on Turner’s solo EP for the movie Submarine, was re-recorded with the whole band for the new album. Track 12 – That’s Where You’re Wrong completes the 40+ minute album. It’s a slow track that picks up at the end – very similar to fan favorite 505.

Here’s the tracklisting for the new album, out June 7th:

1. She’s Thunderstorms
2. Black Treacle
3. Brick by Brick
4. The Hellcat Spangled Shalalala
5. Don’t Sit Down ‘Cause I’ve Moved Your Chair
6. Library Pictures
7. All My Own Stunts
8. Reckless Serenade
9. Piledriver Waltz
10. Love is a Laserquest
11. Suck It and See
12. That’s Where You’re Wrong
Posted by Patrick at 4:07 PM